< School Returns Go Better Than Expected
Update Required To play the media you will need to either update your browser to a recent version or update your Flash plugin.
By John Russell
05 October 2021


In many countries, children have been going to school for more than a month. So far, fears the Delta coronavirus variant would prevent in-person learning have largely proven unfounded.

In twelve countries with high vaccination rates in Asia, Europe and the United States, case rates increased in August. Now, they have mostly fallen back, according to local data and officials.

It is unclear how much the decrease is due to a worldwide decline in cases, and how much it is linked to vaccinations and other measures. Public health experts say they will continue to watch for signs of an increase in cases as winter nears.

Monica Gandhi is a professor of medicine at University of California San Francisco Medical School.

"In the United States, in-school transmission is higher in places with low adult vaccination and no mitigation, but, overall, schools have stayed open," Gandhi said.

Gandhi described the situation in schools as "going better than expected."

Cases among children increased by nearly seven times in August. They reached their high in the first week of September, American Academy of Pediatrics data shows.

Only about 2 percent of U.S. schools have closed temporarily because of COVID-19 outbreaks. That information comes from research company Burbio.

Children represent the largest group of the unvaccinated in most wealthy countries. That is because either vaccinations for their age group have only just begun, or are not yet approved. 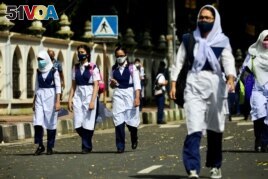 Students return from school after the government has withdrawn restrictions on educational institutions following a decrease in the number of cases of coronavirus disease (COVID-19) in Dhaka, Bangladesh, September 12, 2021. (REUTERS/Mohammad Ponir Hossain)

Not all countries have seen a decrease in cases. In Singapore, cases among children have been on the rise for all of September.

But in Scandinavia, Scotland, Germany, France, South Korea and the United States, cases are falling. Earlier, there were fears the Delta variant would drive up infections.

In Sweden, schools have largely remained open throughout the coronavirus crisis. The country saw a rise in COVID-19 infections among children after the summer holidays. But cases are now at low levels - both among children and the wider population.

In Norway, cases increased to a daily record of 1,785 after the first two weeks of school, before falling by 60 percent as of last week.

Preben Aavitsland is a senior doctor at the Norwegian Institute of Public Health.

"We do expect the current downward trend to continue for a few weeks and then level off at a low level, at least for a couple of months," Aavitsland told Reuters by email.

He added, "Then there are uncertainties about the winter season."

Britain has seen some increase in cases in schools that opened early on, but it has not spread to the wider population, said Neil Ferguson of the Imperial College London.

In Scotland, schools re-opened in mid-August, and COVID cases increased to record numbers by the end of the month.

Now, however, cases among the under 19 have fallen each week since the first week of September.

While cases began rising in Scotland before schools opened, some level of transmission appears to be happening in schools.

"It's very hard to separate community transmission that is related to schools, to transmission in schools. However, clusters of cases in single classrooms do not appear to be particularly high, suggesting that it is at least a mix of both," Rowland Kao of the University of Edinburgh wrote to Reuters by email.

Michael Erman, Gwladys Fouche and Alistair Smout reported on this story for Reuters. John Russell adapted it for Learning English. Susan Shand was the editor.

mitigation – n. the act of making something less severe, harmful, or painful

cluster – n. a group of things or people that are close together