< San Diego Zoo Clones Endangered Horse
Update Required To play the media you will need to either update your browser to a recent version or update your Flash plugin.
By Caty Weaver
20 October 2020


At the San Diego Zoo, in Southern California, little Kurt looks and acts like any other baby horse. He likes to play, pushes against anything that gets in his way, and runs to his mother for milk when he is hungry.

But the 2-month-old differs from every other baby horse in the world in a major way: Kurt is a clone. He was created in a laboratory.

Scientists used cells taken from a male Przewalski's horse in 1980. The cells had been frozen for the last forty years. The scientists also took an egg from a female horse of a different breed. Then, they removed the egg's nucleus and replaced it with the cells from the Przewalski's horse.

The resulting embryo was placed in the womb of another female horse for development. She gave birth to Kurt on August 6.

Scientists have cloned more than twenty other kinds of animals, including dogs, cats, pigs, cows and mice. In 2018, researchers in China created monkeys for the first time using the same cloning methods that produced the first cloned animal, Dolly the sheep, in 1996.

The zoo sees Kurt's birth as a major step in efforts to reestablish the population of the Przewalski's horse, also known as the Asiatic Wild Horse or Mongolian Wild Horse. The small, thickset horses are believed to have disappeared from the wild. About 2,000 live in zoos and wildlife centers. 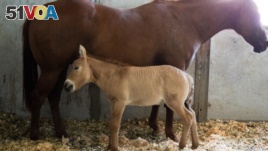 Kurt looks and acts like any other baby horse. But the Przewalski's horse differs from every other baby horse in the world in a major way: Kurt is a clone. (Photo courtesy of ViaGen Pets & Equine)

Bob Wiese is chief life sciences officer at San Diego Zoo Global, which operates the zoo. He said that Kurt is expected to be one of the most genetically important individuals of his breed.

"We are hopeful that he will bring back genetic variation important for the future of the Przewalski's horse population," he added.

Kurt was named for Dr. Kurt Benirschke, who created the Frozen Zoo, a research and collection center at the San Diego Zoo. It provided the scientists with the Przewalski's horse cells used to make Kurt.

The zoo worked jointly with the California conservation group Revive & Restore and the Texas-based company ViaGen Equine in creating Kurt. He was born at a veterinary facility in Texas. He is expected to continue to live there with his mother for another year.

Later, Kurt will move to the San Diego Zoo to live with other Przewalski's horses. Zoo officials hope Kurt will someday become a father himself.

Przewalski's horses take their official name from Russian explorer Nikolai Przewalski, who found a skull and skin of one and shared it with a Russian museum.

At one time the horses lived throughout Europe and Asia, says the Smithsonian's National Zoo and Biology Conservation Institute. Growing populations of humans and farm animals pushed them out of Europe and east into Asia. Outside of zoos, they exist today only in special protected areas of Mongolia, China, and Kazakhstan.

The Smithsonian says Przewalski's horses are the only true wild horses left in the world. It says that wild horse groups in North America and Australia are not truly wild because their ancestors were horses that escaped human owners.

The Associated Press reported this story. Caty Weaver adapted it for VOA Learning English. Hai Do was the editor.

breed – n. a group of animals or plants thought to be related to one or more common ancestors

variation - n. the act or process of being different