< Russia, West Compete for Influence in Africa
Update Required To play the media you will need to either update your browser to a recent version or update your Flash plugin.
By Anna Matteo
02 August 2022


Russian, French, and American leaders are traveling across Africa to win support for their countries' positions on the war in Ukraine.

Experts say it is the most intense competition for influence in Africa since the Cold War when the former Soviet Union and the West sought closer ties with the continent. 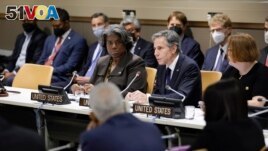 FILE - Secretary of State Antony Blinken and US ambassador to the UN Linda Thomas-Greenfield meet with African ministers, May 18, 2022. (AP File)

Lavrov has been traveling across Africa where many countries are suffering from food shortages. He sought to blame rising food prices on Western countries because they placed trade restrictions on Russia over its war in Ukraine.

Russia has been working to win support in Africa for several years. President Vladimir Putin has tried to strengthen relationships that are more than 50 years old. At that time, the Soviet Union supported many African movements fighting to push out European colonial rulers.

The United Nations vote to condemn Russia's invasion of Ukraine demonstrated some of Russia's influence in Africa. Twenty-eight African nations voted in favor of the resolution. But, 25 countries abstained, meaning they did not vote at all.

In late July, Russia's top diplomat visited Egypt, Congo, Uganda, and Ethiopia. Lavrov accused the U.S. and European countries of driving up food prices by pushing risky environmental policies. He also accused them of keeping large amounts of food during the COVID-19 pandemic.

"The situation in Ukraine did additionally negatively affect food markets," Lavrov said in Addis Ababa, Ethiopia's capital. But he said food shortages were not caused by the "Russian special operation," or war in Ukraine. He blamed the problems on the reaction of the West and its sanctions on his country.

Lavrov was warmly received in Uganda by President Yoweri Museveni. Museveni has been a U.S. ally for many years. But he has refused to criticize Russia over the invasion. Museveni even suggested at the outbreak of the war that Putin's actions might be understandable because Ukraine is in Russia's area of influence.

Lavrov voiced support for reform of the U.N. Security Council to give African countries permanent seats and greater influence.

Museveni is considered an opinion leader in Africa and has held power for about 30 years.

Russia is also trying to win African public opinion through its state television network, RT, formerly known as Russia Today. RT has announced that it will open a new office in Johannesburg, South Africa.

In March, RT was suddenly removed from Africa's biggest paid-television service, Multichoice which is based in Johannesburg. The decision came after the European Union and Britain enforced sanctions against Russia.

It is not clear whether creating the new office will permit RT to broadcast again to Africa through Multichoice. Multichoice claims 22 million people pay for its service.

"For Russia, it is the battle to be heard in Africa. It is not important for the actual war effort but for their long-term political influence," said Anton Harber. He is a professor of journalism at the University of the Witwatersrand.

On his trip to Africa, France's Macron accused Russia of using TV channels like RT to spread propaganda in support of the war.

Macron urged Africans not to side with Russia. He said, "I'm telling you here in Africa, a continent that has suffered from colonial imperialism: Russia is one of the last colonial, imperial powers. She decides to invade a neighboring country to defend her interests," he said. "That's the reality."

Samantha Power, the top U.S. AID official, was in East Africa to promise aid to help the region's fight against hunger during a period of severe lack of rain. She also criticized Russia's blocking of "...Ukraine's grain exports and restricting the trade of Russia's own fertilizer."

Power said in Nairobi, that Putin's actions have caused pain to the "...people of Kenya and on other countries throughout the world."

"He is hurting the people of Kenya," she added, in an effort to help "his own situation."

Cold War –n. the nonviolent conflict between the U.S. and the former U.S.S.R. (Soviet Union) after 1945

continent –n. one of six or seven very large divisions of land on Earth

rival –adj. describing sides that are trying to defeat or be more successful than each other

abstain –v. to choose not to vote

sanctions –n. (usually pl.) an action that is taken or an order that is given to force a country to obey international laws by limiting or stopping trade with that country, by not allowing economic aid for that country