< Rohingya Camp Fire Leaves 15 Dead, 400 Missing
Update Required To play the media you will need to either update your browser to a recent version or update your Flash plugin.
By Bryan Lynn
23 March 2021


The United Nations says at least 15 people were killed in a massive fire at a Rohingya refugee camp in Bangladesh.

The fire injured more than 550 people and left 400 missing at the camp near the coastal city of Cox's Bazar, the U.N. refugee agency said Tuesday. About 45,000 people were left without shelter.

The fire started around midday Monday at the Balukhali camp and burned into the night. Bangladeshi officials were investigating the fire, as aid workers and families searched for further victims and belongings.

"Everything has gone. Thousands are without homes," Rohingya refugee Aman Ullah told Reuters. "The fire was brought under control after six hours, but some parts of the camp could be seen smoking all night long."

Sanjeev Kafley is head of the International Federation of Red Cross and Red Crescent Societies in Bangladesh. He said more than 17,000 shelters had been destroyed. He added that at least 1,000 Red Cross workers and volunteers had worked with fire services to fight the fire. 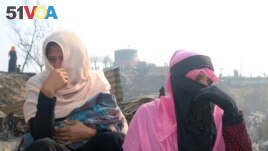 "Yesterday before the fire started, my kids went to study at the Islamic school," said Shappuni, a refugee who uses only one name. "I did not see them after they came back. I found two of my older kids but I still can't find my youngest son."

Some witnesses said barbed wire fencing around the camp had trapped many people and hurt others, leading international aid agencies to call for its removal.

John Quinley is with Fortify Rights, a human rights organization working with Rohingya refugees. He said he had heard similar reports. He added that the fences had also harmed past efforts to get aid supplies and important services to the camps.

"The government must remove the fences and protect refugees," Quinley said. "There have now been a number of large fires in the camps including a large fire in January this year." He called on officials to carry out full investigations into the cause of the fires.

The January fire also destroyed hundreds of temporary homes in the camp and left thousands without shelter.

M. A. Halimis heads operations in Cox's Bazar for the Bangladesh Red Crescent Society. He said in a statement the organization was providing food and water to victims and building emergency shelters for those who lost homes.

The U.N.'s World Food Program said many victims went to nearby camps or were staying at friends' shelters. Others were being kept at learning centers for children or temporary shelter sites.

Bangladesh shelters more than one million Rohingyas. Most fled Myanmar in August 2017 when its military began to attack the minority Muslim population, killing and raping many people and burning whole villages. The U.N. has described the country's action as genocidal. Myanmar denies the accusation.

Bangladesh wants to begin sending the refugees back to Buddhist-majority Myanmar. Several attempts to do so under a joint agreement failed because the Rohingya refused to go. They fear they will face more violence in Myanmar. The country denies them basic rights including citizenship.

The Associated Press and Reuters reported on this story. Bryan Lynn adapted the reports for Learning English. Caty Weaver was the editor.

barbed wire – n. strong wire with short, sharp points on it to keep people out of a place