< Robot Guides Visitors Through Greek Cave
Update Required To play the media you will need to either update your browser to a recent version or update your Flash plugin.
By Ashley Thompson
24 August 2021


A culture guide named Persephone welcomes travelers to Greece and takes them through a famous cave in the north. The guide moves smoothly around the underground area and can talk about it in 33 languages.

Persephone is very intelligent. It also is a human-sized robot. 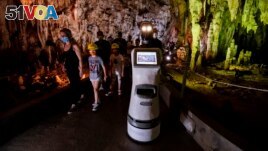 The robot has been in operation for about a month at the Alistrati Cave, 135 kilometers northeast of the city of Thessaloniki.

Persephone guides visitors through the first 150 meters of the cave that is open to the public. For the remaining 750 meters, a human guide takes over.

The robot can give its part of the tour in 33 languages. It can also answer 33 questions, but only in the Greek language.

Nikos Kartalis is the scientific director at the Alistrati site. He had the idea of creating the robot when he saw one on television guiding visitors at an art show. Persephone was built by the National Technology and Research Foundation and cost about 118,000 euros, or 139,000 U.S. dollars.

"People who had visited in the past are coming back to see the robot guide," said Kartalis. He added, "Many foreign visitors couldn't believe Greece had the capacity to build a robot and use it as a guide in the cave."

The robot moves along a walkway in the cave system. Mineral formations within the cave can reach 15 meters long. "This cave is one of the most beautiful, not only in Greece but in Europe, as well," Kartalis said. "It has stalactites and stalagmites in many shapes and colors, even red."

Kartalis said the cave is 3 million years old and was first explored in 1974. It opened to visitors in 1998.

Persephone, with a white body, black head, and two bright eyes, moves on wheels. It guides visitors to the first three of eight stops along the walkway. It can do two more stops, but it is too slow for the tour. Persephone's creators are considering ways to increase her speed.

The robot begins the tour by saying: "My name is Persephone, I am the daughter of the goddess Demeter and the wife of Pluto, the god of the underworld. I welcome you to my under Earth kingdom, the Alistrati Cave."

Patrick Markes traveled to Greece from the Czech Republic.

"It was surprising for me," he said. "I've never experienced such a thing." He added he enjoyed the slower speed of the robot guide. "It goes slower, so I can look around," Markes said.

Markes listened to the machine in his native Czech language for the first three stops. He heard the rest in English from a human tour guide.

Evdokia Karafera is a human guide who partners with Persephone.

Karafera noted, however, that human tour guides must remain part of the operation.

"Robots, at some point in the future, will take over many jobs," she said. "But I believe they cannot replace humans everywhere."

"(Visitors say) ‘the robot is interesting, original, but can't substitute for the human contact with the guide and the conversation we can have on the way back."

cave - n. a large hole that was formed by natural processes in the side of a cliff or hill or under the ground

capacity - n. the ability to do something

stalagmite - n. a pointed piece of rock that sticks up from the floor of a cave and that is formed by dripping water which contains minerals

stalactites - n. a pointed piece of rock that hangs down from the roof of a cave and that is formed by dripping water which contains minerals

kingdom - n. the spiritual world of which God is king

conversation - n. an informal talk involving two people or a small group of people : the act of talking in an informal way