< Researchers: Progress Made in Creating Pre-embryo Models
Update Required To play the media you will need to either update your browser to a recent version or update your Flash plugin.
By Bryan Lynn
12 December 2021


Scientists have reported new progress in creating pre-embryo models from stem cells in a laboratory.

Stem cells are simple cells in the body that can develop into one of many specialized cells. 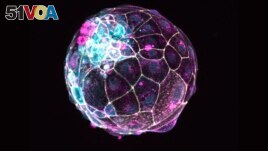 Researchers say the models can provide an effective and ethical way to study human development and to seek new discoveries in reproductive technology.

The latest efforts are described in a study that recently appeared in the publication Nature.

The lab-created pre-embryo structures are called "blastoids." They act as a model for blastocysts, collections of cells that form during the early period of human embryonic development. Blastocysts form a few days after an egg has been fertilized, but before it attaches to the uterus to become an embryo.

Nicolas Rivron is a researcher at the Austrian Academy of Sciences who helped lead the study. He said the models are a very good research alternative to human embryos. This is partly because donated embryos are hard to get and can be difficult to work with in a lab.

Rivron said it is "extremely difficult" to use human embryos to make molecule and gene discoveries in a lab. He added that this limits the ability of scientists "to better understand development and also make biomedical discoveries."

But Rivron said lab-created versions can be made, changed and studied in large numbers to expand human embryonic research. This opens the possibility for new scientific and biomedical discoveries, he added.

For example, Rivron said studying blastoids could lead to the development of birth control treatments that do not contain hormones.

To create the blastoids, Rivron said his team used two different kinds of stem cells: embryonic stem cells from already established cell lines and stem cells reprogrammed from adult cells. No new embryonic cell lines were made for the research.

Rivron said blastocysts were grown separately to compare them side-by-side with the lab-created structures.

The study showed that the blastoids effectively reproduced important parts of early embryo development. Some were placed in contact with cells from the lining of a uterus that had been given hormones. About half of the blastoids attached to the cells and started to grow in the same way as blastocysts would.

Rivron said the researchers stopped the blastoid growth after 13 days and examined the cells. At that point, he said the collection of cells did not show the level of growth or organization that would be expected after 13 days in an embryo.

Rivron said blastoids are not subject to that rule. But he noted the guidelines state that they should never be placed into an animal or human.

"It is very clear that blastoids are not embryos...and if they are not, then why would we apply the 14-days rule to these structures?" he said. But Rivron added that his team decided to stop after 13 days "for the sake of transparency and for making sure things are very well understood by the public."

Magdalena Zernicka-Goetz is an expert in stem cell biology at the University of Cambridge in Britain. She was not involved in the study. Zernicka-Goetz noted that it is not the first time scientists have created a human blastoid. But she noted that "every single step is significant," in helping researchers improve the process and create better models.

ethical – adj. relating to what is right or wrong

alternative – n. one of two or more things that you can choose between

hormone – n. a natural substance that is produced in the human body and determines how the body grows and develops