< Researcher: Cattle Can Be Trained to Use the Bathroom
Update Required To play the media you will need to either update your browser to a recent version or update your Flash plugin.
By John Russell
18 September 2021


A small scientific study suggests that cattle can be trained to leave their waste in special areas.

The goal of the research was to reduce the bad environmental effects of cattle.

In the recent study, scientists trained 11 out of 16 young cattle to use the "MooLoo" - a kind of bathroom for cattle. 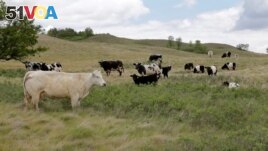 Cattle graze on a pasture affected by the recent drought on a farm near Fairy Hill, Saskatchewan, Canada, June 25, 2019. (REUTERS/Valerie Zink)

The researchers used a sweet treat to get the cows to push through a door and urinate in the special area. It took only 15 days to train the young cattle.

"The cows are at least as good as children, age 2 to 4 years, at least as quick," said Lindsay Matthews of New Zealand's University of Auckland.

Matthews was the lead writer of the study that appeared recently in Current Biology. He worked with other researchers on the tests at an indoor animal research laboratory in Germany.

Urine contains nitrogen. When mixed with solid waste, it becomes ammonia. The chemical can play a part in environmental problems such as acid rain, Matthews said. It can also pollute water with nitrates and create the pollutant nitrous oxide, he said.

Cattle urinate a lot. A single cow can produce about 30 liters of urine a day, Matthews said. In 2019, nitrous oxide made up seven percent of all the U.S. greenhouse gases, the Environmental Protection Agency reports.

Scientist Brian Hare of Duke University was not part of the research but said he was not surprised by the findings.

"I am surprised no one has demonstrated this before," Hare said. "The critical question is can it and will it scale?"

Scale means to do something more often or in larger amounts.

If it could be done, training animals would make it easier to deal with waste products and reduce greenhouse gasses, said Donald Broom. He is a professor of animal welfare at the University of Cambridge in England.

At the laboratory in Dummerstorf, Germany, the researchers put the cattle in the special area, waited until they urinated and then gave them a treat: a sweet liquid of mostly molasses. Cows like sweets, Matthews said. If the cows urinated outside the MooLoo after the training, they got a shot of cold water.

Researchers gave drugs to the cattle to get them to urinate more because they had limited time. And researchers only trained cows to use the MooLoo to urinate, not to leave solid waste.

Urine is a bigger problem, at least in Europe, Matthews said. But he predicted the researchers could train cows to leave solid waste too.

The biggest environmental problem for cattle, though, is the heat-trapping gas methane. Cows release the gas that scientists say causes global warming.

The cows cannot be trained to not release such a gas, Matthews said: "They would blow up."

Seth Borenstein reported on this story for the Associated Press. John Russell adapted it for Learning English. Mario Ritter, Jr. was the editor.

treat –n. something that tastes good and is not often eaten

urinate – v. (medical) to send urine (liquid waste) out of the body