< Report: Stolen US Military Weapons Used in Violent Crimes
Update Required To play the media you will need to either update your browser to a recent version or update your Flash plugin.
By Susan Shand
18 June 2021


In the first investigation of its kind made public in many years, an Associated Press investigation has found that at least 1,900 U.S. military guns were lost or stolen during the 2010s. Some of the weapons were later used in violent crimes.

The AP reports that since the military limits the release of such information, the number is likely much higher. 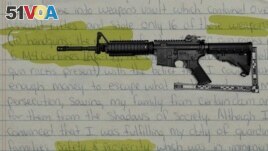 A photo illustration combining a defendant's letter to a judge in the case of weapons he stole from a Massachusetts armory and an evidence photo of an M4 carbine rifle. (AP Illustration/Nat Casta&#241;eda)

The investigation was based on government records from the Army, Marine Corps, Navy and Air Force. The documents showed that many guns, including machine guns and automatic assault rifles, had disappeared from storage spaces, ships and other places. None were reported publicly.

Military explosives were also lost or stolen, including some grenades that were later found at a home in Atlanta, Georgia.

In Afghanistan, 65 Beretta M9s were stolen from a storage building. The missing guns were not discovered for weeks and were never recovered.

The Pentagon used to share yearly information about stolen weapons with Congress, but that requirement ended years ago.

The Army and Air Force could not tell the AP how many weapons were lost or stolen from 2010 through 2019. So, the AP built its own database using information it received through criminal cases, property loss reports and other records.

Military weapons can be very appealing to some military insiders who know the weak points in the security. Such individuals can make money by stealing the guns and selling them.

"It's about the money, right?" said Brigadier General Duane Miller. He is the Army's second highest law enforcement official.

High officials in the Army, Marines and the Secretary of Defense's office said tracking weapons is very important. However, the officials said they do not think missing weapons is a large problem. They noted that the number is very small when compared to the military's total number of weapons.

Defense Department spokesman John Kirby said the military has "several million" weapons. He said cases of missing firearms are taken "very seriously." He added that the military could account for 99 percent of its weapons.

Since there is no longer a reporting requirement, the Pentagon is responsible for telling Congress about missing weapons. That has not happened since at least 2017.

A Department of Defense official told the AP that while a missing missile would, of course, be reported, a stolen machine gun would not.

While the AP's investigation centered on the 2010s, incidents linked to missing military weapons still happen.

In May, an Army trainee fled with an M4 rifle and hijacked a school bus full of children. He eventually let everyone go free. Last October, police in San Diego pulled over a car and found a grenade launcher in the front seat.

The AP found eight times that stolen military guns were used in civilian shootings or other violent crimes. The cases were found by examining investigative and court records, as well as published reports.

Kirby said his office was not aware of any stolen or missing guns being used in civilian crimes. The FBI's Criminal Justice Information Services said 22 guns belonging to the military were used to commit crimes during the 2010s. But that total could include weapons the military sold legally.

Charles Royal is a former army employee who was in charge of the military's gun registry.

"You're dealing with millions of weapons," Royal said. He added: "But we're supposed to have 100 percent (reconnaissance), right. OK, [and] we're not allowed discrepancy on that, but there is so much room for discrepancy.

grenade – n. a small bomb thrown by hand or shot from a gun

reconnaissance – n. military activity in which soldiers are sent to find out information about an operation

discrepancy – n. a difference between two things that should be the same