< Refugees Tell About Conflict in Ethiopia’s Tigray Area
Update Required To play the media you will need to either update your browser to a recent version or update your Flash plugin.
By Susan Shand
12 November 2020


Filimon heard the sound of heavy weapons in his Ethiopian border town, and he started to run. Filimon is an Ethiopian refugee who spoke to the Associated Press, or AP.

He is now in Sudan. He does not know if his wife and two small children are trapped in the fighting or among the thousands of refugees. He is afraid and would only give one name.

Speaking by phone to AP from Sudan on Thursday, Filimon described what he experienced in the Tigray town of Humera last week. 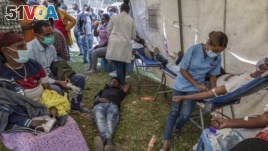 A man lies down after giving blood at a blood drive in support of the country's military, at a stadium in the capital Addis Ababa, Ethiopia Thursday, Nov. 12, 2020. (AP Photo/Mulugeta Ayene)

He said those attacking came from the direction of Eritrea, though he does not know if they were Eritrean forces.

Ethiopia may be close to a civil war as it fights Tigray militants at its northern border. The Tigrayans are demanding greater independence. Experts fear the conflict could bring in neighboring countries on both sides.

Tigray leaders have accused Eritrea of joining the week-long conflict at the request of Ethiopia's federal government. Ethiopia's government calls the Tigray government illegal. Ethiopia has denied the involvement of Eritrean forces.

After a day-long walk with about 30 others fleeing, he has been in Sudan for two days.

There are 11,000 refugees now, but officials are preparing for up to 100,000, the United Nations refugee agency said Thursday. About half of them are children.

The UN agency said it was not taking statements yet about the fighting. It is just trying to treat the wounded and separate soldiers from refugees.

In Ethiopia, worries over the conflict are spreading far beyond the northern Tigray area. The federal government said it had detained about 150 "operatives" accused of trying to spread "fear and terror" throughout the country.

Hours later, police in Addis Ababa said they had arrested 242 people for trying "to cause terror in the capital." It is not clear if these are separate numbers.

Tigrayans in Addis Ababa are scared. "We don't go to the office because they might also arrest us," said one ethnic Tigrayan in the capital.

Ethiopia's parliament has accused top Tigrayan officials of "attacking the federal army." It voted to remove immunity from prosecution for 39 top Tigray officials, including its president.

Around the country, people have demonstrated in support of the federal government's military moves against the Tigray People's Liberation Front, or TPLF. That group governs the area.

Ethiopia's prime minister won the Nobel Peace Prize for his peacemaking efforts. But Prime Minister Abiy Ahmed has rejected international requests for negotiations. He said TPLF officials must be removed and arrested and all their weapons destroyed.

What appears to be a sudden move toward civil war has been coming for months. After taking office in 2018, Abiy announced political reforms that won him the Nobel prize. However, he also pushed the TPLF aside. It had been a major part of Ethiopia's federal government.

The TPLF left the government and held its own local elections. Ethiopia's federal government considers this illegal.

immunity– n. a special protection from what is required for most people by law

prosecution– n. the act or process of bringing a person who is accused of a crim