< Quake-Measuring Device Looks at Inside of Mars
Update Required To play the media you will need to either update your browser to a recent version or update your Flash plugin.
By Jonathan Evans
01 August 2021


A quake-measuring device on Mars is providing the first close look at the inside of the planet. The findings show a surprisingly thin crust and a hot, molten core beneath the Martian surface.

Scientists recently reported that the Martian crust is about the same thickness as Earth's. The Martian mantle, the area between the crust and core, is about half as thick as Earth's. And the Martian core is bigger than what the scientists expected. However, it is still much smaller than Earth's core. 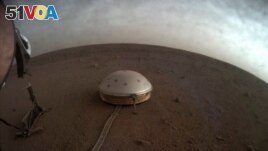 In this undated photo made available by NASA on Thursday, July 22, 2021, clouds drift over the dome-covered SEIS seismometer of the InSight lander on the surface of Mars.

These new studies confirm that the Martian core is molten. But scientists say more research is needed to know whether Mars has a solid inner core like Earth's, surrounded by a molten outer core.

The findings are based on about 35 marsquakes recorded by a French seismometer on the American space agency NASA's InSight spacecraft. A seismometer is a device that responds to ground noises and shaking. InSight arrived on Mars in 2018.

The seismometer on InSight has detected 733 marsquakes so far. But the 35 with magnitudes from 3.0 to 4.0 served as the basis for these studies. Most of the sizable quakes came from a volcanic area 1,600 kilometers away where lava may have flowed millions of years ago.

Mark Panning is with NASA's Jet Propulsion Laboratory and took part in the crust study. He said even the biggest marsquakes are so weak they would barely be felt on Earth. He is hoping for a bigger quake which would make it easier to process the information and describe the inside of Mars.

Current measurements show Mars' crust possibly reaching as deep as 20 kilometers to 37 kilometers. The mantle extends down nearly 1,600 kilometers. And the relatively lightweight core has a radius of 1,830 kilometers.

Panning said, "By going from cartoon understanding of what the inside of Mars looks like, putting real numbers on it...we are able to really expand the family tree of understanding" how our solar system's rocky planet formed.

The InSight mission has been extended by another two years. But in recent months, InSight has had power issues. Dust covered its solar panels, just as Mars was approaching the farthest point in its orbit around the sun. Solar panels are large, flat pieces of equipment that use the sun's light or heat to create electricity.

Flight controllers have increased power by using the spacecraft's robotic arm to release sand into the wind to remove some of the dust on the panels. The seismometer has continued working. But all other science instruments have been temporarily stopped because of the power issues. A German heat-seeking device, however, was declared dead in January after it failed to dig more than half a meter into the planet.

core – n. the central part of a heavenly body, as the earth or sun

radius – n. a straight line from the center of a circle or sphere to any point on the outer edge

cartoon – adj. similar to a drawing in a newspaper or magazine intended as a humorous comment on something

dust – n. fine powder made up of very small pieces of earth or sand