< Prehistoric Arabia Brought Early Humans from Africa
Update Required To play the media you will need to either update your browser to a recent version or update your Flash plugin.
By Gregory Stachel
09 September 2021


New evidence suggests that the desert of the Arabian Peninsula once had water and plants that brought early humans and large animals from Africa.

Until 10 years ago, scientists trying to rebuild the story of early human movements out of Africa knew little about the Arabian Peninsula.

Much more is known about early human settlements in the Levant region. The Levant is the area that includes modern-day Israel, Jordan, Lebanon and parts of Syria. Archaeological research has been carried out there for more than one hundred years.

But a recent study published in Nature suggests that the Arabian Peninsula may have served as a bridge between Africa and Eurasia. 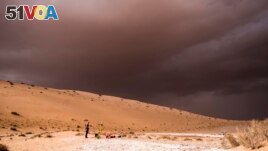 In this undated photo provided by the Palaeodeserts Project in September 2021, a storm arrives during an archaeological excavation of the remains of an ancient lake in northern Saudi Arabia, where ancient humans lived alongside animals such as hippos. (Klint Janulis/Palaeodeserts Project via AP)

Michael Petraglia is one of the writers of the study. He is an archaeologist at the Max Planck Institute for the Science of Human History in Jena, Germany. The research team included scientists from Germany, Saudi Arabia, Australia, Britain and other countries.

He said, "Arabia has not been part of the story of early human migration because so little work was done there before."

Huw Groucutt is also based at the Max Planck Institute. He travels to archaeological places in the northern Arabian Peninsula where rolling sand dunes, or hills, extend as far as the eye can see.

Scientists started to look closely for archeological remains in the region after satellite images showed signs of prehistoric lakes in the areas that are now desert. "We noticed color patterns made by ancient lakes — sand dunes are kind of orange-colored, while ancient lakes are tinted white or gray," said Groucutt.

Over the past 10 years, archeologists have found stone tools from several periods of prehistoric settlement by early human groups. The oldest was from 400,000 years ago.

Researchers found that, during several periods in the past, the region had lakes and was covered with grassland, or savannah. Study of rocks and soil from the ancient lakes and remains of animals like hippopotamuses, or hippos, suggest water was available.

The researchers said early humans and animals moved from northeast Africa into the Arabian Peninsula during these windows of welcoming climate.

Petraglia said, "flowing rivers and lakes, surrounded by grasslands and savannah, would have attracted animals and then the early humans that were in pursuit of them."

Hippos require bodies of water several meters deep to live. Remains of other animals, including ostriches and antelopes, show "a strong biological connection to northeast Africa," he said.

Rick Potts directs the Human Origins Program at the Smithsonian's National Museum of Natural History in Washington, D.C. He said the research has combined archaeology and climate records going back 400,000 years. It showed that early humans moved across the land when the climate changed.

Potts was not involved in the new study. But he said the periods in which there were and were not humans in the area followed changes in climate.

Christina Larson reported this story for The Associated Press. Gregory Stachel adapted it for VOA Learning English. Mario Ritter, Jr. was the editor.

region – n. a part of a country or of the world that is different or separate from other parts in some way

archaeological –adj. related to the science that deals with past human life and activities and the study of bones, tools and objects of ancient people

pattern – n. something that happens in a regular and repeated way

pursuit – n. the act of following or chasing someone or something