< Pope Visits Roma in Slovakia to Show Inclusion
Update Required To play the media you will need to either update your browser to a recent version or update your Flash plugin.
By Jill Robbins
14 September 2021


Pope Francis traveled to the eastern part of Slovakia on Tuesday to meet with the country's Roma. The visit was a show of inclusion for the most socially excluded minority group in Slovakia.

The Roma are a group whose families came to Europe between the eighth and 10th centuries from the Punjab area of Northern India. They have long suffered discrimination, powerlessness and poverty.

Francis' visit to the Lunik IX settlement in Kosice was a high point of his four-day visit to Hungary and Slovakia.

It was his first trip since his stay in the hospital in July. It also marked his first international trip after an almost two-year break because of the coronavirus pandemic.

Lunik IX is the biggest of about 600 disorganized, separate settlements where the poorest of Slovakia's 400,000 Roma live. Most people living there lack basics such as running water, waste systems, gas and electricity.

Even before the pope arrived, locals there said some things had already changed.

"We have new roads, new stairs, they repaired everything," resident Alexander Horvath said. "It was all destroyed before."

Changes are in the air

Another resident, Mario Tomi, said the changes are not only physical. "People are different, you can feel in the air the Holy Spirit," Tomi said. "You can feel freedom in the air."

Pope Francis has long sought to meet with the world's most powerless groups during his foreign trips. He has made sure to always include visits to poor neighborhoods and prisons, where he shares words of support.

Francis started the day by celebrating a Byzantine rite Mass in Presov, near Kosice. That form, also known as the eastern Mass, is a religious service common among the country's Greek-Catholic believers.

Organizers said more than 30,000 people attended and received communion in the form of bread and wine on small spoons as is done in the eastern Mass.

Well before Francis' arrival, people filled the area in Lunik IX as a group sang religious songs. They cheered and wildly waved the yellow and white flags of the Holy See – the universal government of the Catholic Church. Francis made his way through the crowd in his special "popemobile" vehicle before the service. 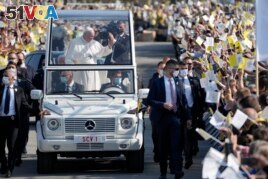 "We came here at 3 a.m. to get the best spot," said Slavka Marcinakova, a local resident from Presov. "[The] pope coming to Slovakia — you have an opportunity like this only once in a lifetime, we are so happy for that."

Francis, 84, has appeared in good form during his trip. He appears to be enjoying traveling again after the coronavirus and his hospitalization in July made him stay in the Vatican.

Nicole Winfield and Karel Janicek reported on this story for the Associated Press. Jill Robbins adapted it for Learning English. Ashley Thompson was the editor.

marginalize – v. to put or keep (someone) in a powerless or unimportant position within a society or group

stairs – n. (plural) a series of steps that go from one level or floor to another

What do you think of the Pope's visit to the Roma in Slovakia? We want to hear from you. Write to us in the Comments Section.