< Pope Francis Limits Use of Latin in Ceremonies
Update Required To play the media you will need to either update your browser to a recent version or update your Flash plugin.
By Jill Robbins
19 July 2021


Pope Francis placed limits Friday on the use of Latin in the Roman Catholic Church service called Mass. The decision cancels a reform established by Pope Benedict XVI, who led the Church just before Francis.

Benedict had ordered that Latin could be used in special celebrations of the mass. He also permitted the use of Latin in usual masses if the membership of an individual church requested it.

Pope Francis said he made the change because Benedict's reform had caused division in the church. He also said the measure had been abused by Catholics seeking the cancellation of major changes made by the Church in 1960. Known as Vatican II, the changes were designed to reshape the Church for modern times.

Catholics reacted quickly to Pope Francis' announcement Friday. Some objected to his decision and said it felt like an attack on them and ancient customs.

Others seemed shocked by the action. They said they had never known a pope to so directly reject an important ruling of the preceding pope.

The 84-year-old Francis did not ban Latin masses. But, now churches that want to celebrate Latin Mass will have to receive permission to celebrate it from higher officials and approval from the Vatican.

Also, Church officials will investigate individual churches currently celebrating Latin mass to learn if they accept Vatican II. Those groups will not be permitted to use usual Catholic churches. Instead, higher officials must find other places for them without creating new parishes.

In addition, Francis said the Church would not permit the formation of new Latin Mass services.

Francis said he was taking action to support unity and heal divisions within the church that had grown since Benedict's 2007 reform. He said he based his decision on findings of a 2020 Vatican study of all middle level Catholic officials, known as bishops. Francis said the research uncovered a worrisome and saddening situation that made him see the need to intervene.

One of the reasons Francis gave in his letter was based on a document from Vatican II. The bishops of that time said using modern languages meant celebrants "would not assist as strangers and silent spectators in the mystery of faith, but, with a full understanding of the rites and prayers."

The Pope's action immediately angered traditionalists already opposed to his policy-making which is more liberal than was Benedict's.

Joseph Shaw is chairman of the Latin Mass Society of England and Wales. "This is an extremely disappointing document which entirely undoes the legal provisions," set up by Benedict, he said. 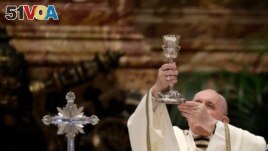 FILE - in this , Thursday, April 1, 2021 file photo, Pope Francis celebrates a Chrism Mass inside St. Peter's Basilica, at the Vatican.

Christopher Bellitto is a professor of church history at Kean University in the American state of New Jersey. He said Francis was right to intervene, noting that Benedict's reform had had many unwanted results. Among them, he said, were new divisions within the church and, for a time, poorer relations with Jews.

Francis was right that "Benedict's 2007 loosening of regulations against the Latin rite allowed others to use it for division," Bellitto said. The criticism the Pope is now receiving "proves his point," he added.

The criticism was indeed fierce, although it is also likely that many will simply ignore Francis' decision.

They point to the growth of conservative parishes, often attended by young, large families, as well as new religious orders that celebrate in Latin. The Latin Mass Society says the number of Latin masses celebrated each Sunday in England and Wales had increased from 20 to 46 since 2007.

Nicole Winfield wrote this story for the Associated Press. Jill Robbins adapted it for Learning English. Caty Weaver was the editor.

parish – n. an area that has its own local church and priest or minister

spectator – n. a person who watches an event, show, game, activity, or the like, often as part of an audience

faith – n. strong belief or trust in someone or something

disappointing – adj. to make (someone) unhappy by not being as good as expected or by not doing something that was hoped for or expected

rite – n. an act that is part of a usually religious ceremony

What do you think of Pope Francis' decision? We want to hear from you. Write to us in the Comments Section.