< Poor Countries Struggle to Vaccinate Against COVID-19
Update Required To play the media you will need to either update your browser to a recent version or update your Flash plugin.
By Anna Matteo
28 June 2021

Health experts and world leaders have given this warning. It is not enough to vaccinate people in rich nations against the coronavirus. All countries must get enough vaccines to protect all their people.

"We've said all through this pandemic that we are not safe unless we are all safe," said John Nkengasong. He heads the Africa Centers for Disease Control and Prevention. 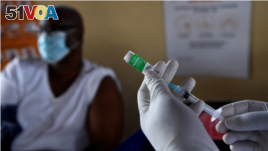 A health worker prepares a dose of the Oxford/AstraZeneca COVID-19 vaccine in Francistown, Botswana, March 26, 2021. (AFP)

At the start of the pandemic, many poor countries with weak health care systems appeared to have avoided major problems.

But that is changing.

Concerns are growing in some of the world's poorest countries as coronavirus infections increase and new versions of the virus appear. There also have been shortages of vaccine in many countries.

The crisis has shocked public health officials and millions of unvaccinated people. This is especially the case in countries where people live with only enough money to survive and pay for health emergencies themselves.

The United Nations supported program called COVAX aims to provide vaccines to poor countries. However, the program faces a serious shortage of vaccines.

As a result, the U.S., Britain and the other rich, industrialized countries agreed to share at least 1 billion vaccine doses with poor countries over the next year. The Group of Seven nations are expected to begin sharing the vaccines in August.

Some of Africa's 1.3 billion people are at risk. They make up 18 percent of the world's population. However, the continent has received only two percent of all vaccine doses given worldwide. Some African countries have yet to vaccinate anyone.

Zimbabwe has enforced new lockdown measures because of a sharp rise in cases and deaths in the country. It has over 15 million people but has used just over a million of 1.7 million doses of vaccine. Experts blame the lack of vaccines in urban areas on the difficulties of organizing and administering vaccination efforts.

Months ago, officials in Zimbabwe were urging people to get vaccinated. But many chose not to. Now, long lines form at health centers giving the vaccines. Many people are worried about winter and new forms of the virus.

Dr. Matshidiso Moeti is Africa director of the World Health Organization. She said the increase in cases should push everyone to action. She explained that people must be tested and separated from others. Keeping records of people's movements, known as contact tracing, is another measure that must quickly increase, she added.

She said recently that new coronavirus cases in Africa have risen by nearly 30 percent.

In Zambia, a vaccination campaign has slowed. Officials report that the country is running out of oxygen for patients with breathing problems. Sick people whose cases are not severe are being turned away by hospitals in Lusaka, the capital.

And Uganda is fighting a sharp rise in cases and is reporting different forms of the virus. Health officials told the Associated Press that people in their 20s and 30s are getting infected.

Dr. Ian Clarke founded a hospital in Uganda. He said that vaccine demand is growing among people who, at first, did not want to be vaccinated. But now, he added, they do not know when or from where they will get more vaccine doses.

The World Health Organization, or WHO, said nearly 90 percent of African countries are set to miss the global target of vaccinating 10 percent of their people by September.

However, concerns about vaccination efforts are not limited to Africa.

At the end of May, 600,000 people in Afghanistan had received at least one dose of the vaccine. That is less than two percent of the population of 36 million.

China donated 700,000 doses of vaccine which arrived recently. Within hours, "people were fighting with each other to get to the front of the line," said Health Ministry spokesperson Dr. Ghulam Dastigir Nazari.

And in Haiti, hospitals are turning away sick people. The country is waiting to receive its first vaccines. Supplies from the UN's COVAX program have been delayed. Haitian officials also worry that the doses cannot be kept at the required temperature for safe storage.

Mutsaka reported from Harare, Zimbabwe. Associated Press writers around the world contributed to this report. Anna Matteo adapted it for VOA Learning English. Mario Ritter, Jr. was the editor.

dose –n. the amount of a medicine, drug or vitamin that is taken at one time

clinic –n. a place where people get medical help

mask –n. a covering for the face or part of the face: especially related to preventing the spread of disease

continent –n. one of the great divisions of land on Earth

lockdown –n. a state of isolation or restricted access put in place as a security measure