< Police Break Up Wedding Parties in the Arab World
Update Required To play the media you will need to either update your browser to a recent version or update your Flash plugin.
By John Russell
29 September 2020


In the Arab world, police officers are taking action to control wedding parties. In recent weeks, some weddings have ended with police arresting party goers and giving fines.

These moves come at a time when coronavirus cases are rising in the Middle East.

Still, many couples are moving forward with their celebrations. But from the Palestinian territories to the United Arab Emirates (UAE), officials say traditional large weddings are helping the coronavirus to spread.

In Jenin, in the northern West Bank, Mustafa Khatib and six members of his band spent two nights in jail. They played at a crowded wedding party earlier this month. Police fined the group $11,000.

Palestinian officials have forced many people to suspend ceremonies, said a police spokesman. Yet the punishments, detentions and infections have not stopped people from getting married.

"You plan to have a small wedding but then all your relatives and friends show up," noted Qasim Najjar. "This is our custom."

Najjar himself was recently married in the northern West Bank village of Deir Sharaf. The wedding party was broken up by police. 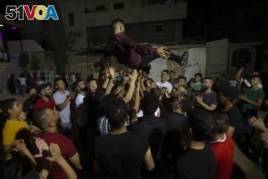 A Palestinian groom is thrown in the air during a wedding party in Azmut near the West Bank city of Nablus, Thursday, Sept. 24, 2020. In a region where marriage is the cornerstone of society, couples are plowing ahead with weddings, despite the deadly risks. From the Palestinian territories to the United Arab Emirates, officials attribute a spike in coronavirus cases to traditional, large-scale weddings that flout public health restrictions. (AP Photo/Majdi Mohammed)

Indoor wedding spaces in towns like Hebron have become places where the virus has been known to spread, he said.

The Palestinian Authority has reported over 34,500 cases in the West Bank and 270 deaths from COVID-19.

Ahmad Tibi is an Arab-Israeli lawmaker. He told The Associated Press that the infections in Arab areas of Israel have risen from around 3 percent to 30 percent during the summer wedding season. Israeli citizens, unhappy after a failed first attempt at coronavirus restrictions, are starting to "disregard government instructions," he added.

Disregard is a term that means to treat something as unimportant.

When Egypt's wedding halls closed this spring, wealthy people moved their large celebrations to private homes. Working-class Egyptians took their parties to the streets, leading local police to break up the celebrations. But restrictions have eased as virus cases have decreased. Although Egyptian officials still warn of a possible "second wave," the government announced recently that weddings could take place outdoors and in some hotels.

In the UAE, a health ministry spokeswoman noted that close to 90 percent of new cases came from crowds at weddings, funerals and other events.

The Emirati government has increased its attention on wedding parties. Last weekend, officials ordered the detention of eight people who had thrown large parties without face masks.

Those arrested face prison terms of up to six months and fines of at least $27,226 each.

Some Arab couples are getting married and obeying health rules. Their wedding parties are different from traditional weddings, however. During the Palestinian Authority's lockdown earlier this year, Baraa Amarneh and Imad Sharaf got married near Hebron. They held hands while wearing latex gloves.

"Without all the neighbors and friends, you're left with what a marriage is," she said. "Two people."

Isabel Debre and Mohammed Darahgmeh reported on this story for the Associated Press. John Russell adapted it for VOA Learning English. George Grow was the editor.

wedding – n. a ceremony at which two people are married to each other

couple – n. two individuals who are married or close together

instruction – n. an order or direction

hall – n. a usually long, narrow passage inside a building with doors that lead to rooms on the sides

glove – n. a covering for the hand that has separate parts for each finger

lockdown – n. a temporary state of restricted movement or activity