< Polar Bear Hotel Opens in China
Update Required To play the media you will need to either update your browser to a recent version or update your Flash plugin.
By Jonathan Evans
20 March 2021


A hotel that calls itself the world's first "polar bear hotel" has opened in northeastern China.

The Polar Bear Hotel is part of the Harbin Polarland amusement park in Harbin, the capital and largest city in Heilongjiang province. It opened earlier this month and promised that guests would be able to see live polar bears from all 21 guest rooms.

"Whether you're eating, playing or sleeping, polar bears will keep you company," Harbin Polarland said in a statement on the WeChat messenger service.

Yang Liu is a spokeswoman for Harbin Polarland. She told Reuters that the indoor area is only part of the bears' total living space. She said they are also let outdoors when temperature and air quality permit. 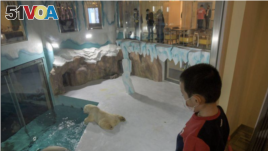 Visitors look at polar bears in an enclosure inside a hotel at a newly-opened polarland-themed park in Harbin, capital of northeast China's Heilongjiang province March 12, 2021.

Liu added there has been "very high" interest in staying at the hotel, where rooms cost from about $290 to $351 a night.

But some animal rights activists have criticized the hotel.

Jason Baker is vice president at animal rights group PETA. He told Reuters, "Polar bears belong in the Arctic, not in zoos or glass boxes in aquariums – and certainly not in hotels."

He added, "Polar bears are active for up to 18 hours a day in nature, roaming home ranges that can span thousands of miles, where they enjoy a real life."

In 2016, a shopping center in the southern city of Guangzhou drew worldwide criticism after videos showed a polar bear named Pizza lying on her side in a glass-walled area.

Harbin Polarland was established in 2005. It calls itself the world's first polar performing arts amusement park.

Andrew Galbraith reported on this story for the Reuters news service. Jonathan Evans adapted this story for Learning English. Bryan Lynn was the editor.

artificial – adj. not natural, but made by people

aquarium – n. a building people can visit to see water animals and plants

roam – v. to move around a place without any purpose

span – v. to reach or extend across