< Phrases, Adjectives, Determiners to Describe Autumn
Update Required To play the media you will need to either update your browser to a recent version or update your Flash plugin.
By John Russell
30 September 2021


North America is now in the fall season – a time of cooler temperatures, colorful leaves, and seasonal treats.

Fall is a season we describe in terms of colors and feelings. Yellow or orange leaves fill many trees. And people feel happiness or calmness when they walk outdoors.

In this week's Everyday Grammar, we will explore the connection between fall and grammar. You will learn about how to describe fall through noun phrases, adjectives and determiners – markers of nouns. 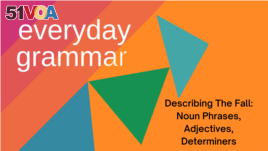 Let's start with a few important terms and ideas.

A cool wind suggested the arrival of fall.

Let us consider each of the words in a cool wind individually. Wind is a noun. Cool is an adjective. The word a is a determiner – it identifies the beginning of the noun phrase and tells whether it is general or specific.

Determiners can mark the beginning of noun phrases

Think of determiners as markers of nouns or noun phrases. They act like a sign to show that a noun is coming. These determiners mark the beginning of a noun phrase – much like the way changing leaves might mark the arrival of fall.

Determiners include words such as the, a, an, this, those. Some grammar books say some kinds of pronouns – his, her, their – act as determiners as well.

Their new tree has such beautiful leaves!

Determiners can help you identify nouns and adjectives

When you can identify determiners, your ability to identify nouns and adjectives will improve. And you will be better able to understand sentences in which you do not know the meaning of all of the individual words.

Imagine you are reading a book that describes the fall. You might read something like the following:

The -[blank]- leaves fell from the tree.

The sentence begins with the determiner the. Then there is the noun leaves. But what about the missing word?

You know that it is likely an adjective. It is a term that describes something about the noun. Ask yourself what kinds of adjectives usually describe leaves.

The radiant leaves fell from the tree.

But the sentence could have been different, as in:

The amber leaves fell from the tree.

In this case, amber means a color that is between yellow and orange. But still, the adjective connects with the general idea of light and color.

What if you don't see a determiner?

All the examples we have explored use a determiner to mark the beginning of a noun phrase.

But English sentences do not always have such words.

In this case, the subject is large pumpkins – a noun phrase that consists of an adjective, large, and a noun, pumpkins.

Still, the general idea is that the adjective comes before the noun.

The next time you read in English, pay careful attention to how the writers use determiners, adjectives and noun phrases. Note when determiners are present and when they are not.

With time, you will use adjectives, noun phrases and determiners to create your own descriptions – perhaps of a happy fall day, perhaps of another time altogether.

John Russell wrote this lesson for Learning English. Susan Shand was the editor.

fall – n. the season between summer and winter : the season when leaves fall from trees

grammar – n. the entire system and structure of a language

pumpkin – n. a large, round, orange vegetable used as food and sometimes as a decoration