< Phrasal Verbs with Spring in Them
Update Required To play the media you will need to either update your browser to a recent version or update your Flash plugin.
By John Russell
29 April 2021


Spring is lovely time of year in the United States. It is a time of growth and movement. Trees flower and birds sing.

In a celebration of spring, this week's Everyday Grammar will explore phrasal verbs with the word "spring." You will learn about the similarities and differences between "spring from," "spring on," and "spring up."

Spring as a noun 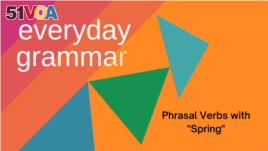 Spring is a season and a noun with several different meanings. But spring is also a verb. It means to move suddenly or quickly to a different position.

This idea is important as we explore phrasal verbs with "spring" in them.

Before we begin, a word about phrasal verbs. Phrasal verbs have a verb and one or more short words linked to it. The verb and short word (or words) act together to take on a new meaning. They mean something different from what the individual words suggest.

So, spring, a verb, has a different meaning in the phrasal verb form "spring from." What does "spring from" mean? Let's find out.

The phrasal verb "spring from" is often followed by a noun. We say something sprang from something - when talking about the past.

"Spring from" means to start from or to be caused by something.

Imagine you hear a discussion with a famous musician. The musician might describe how he or she got the idea for a song:

The song sprang from a childhood memory.

The meaning is that the childhood memory started or caused the idea for the song.

Americans generally use the structure spring (something) on (someone).

It means to surprise a person with something, such as a request, decision or announcement.

Imagine you hear two workers talking after a business meeting. One worker might say to the other:

I can't believe how the client sprang that bad news on us!

The worker means that the client surprised the business with a sudden announcement.

Our final phrasal verb is "spring up." Spring up means to grow or appear suddenly.

It can have a close connection to spring, the season.

For example, you could say that in spring, flowers spring up overnight.

You may have noticed that our phrasal verbs – and the noun spring, the season – carry or suggest the idea of a beginning, growth, movement or change.

The next time you are learning new vocabulary – try to make connections between the meanings of different terms.

In the same way, vocabulary words have different meanings, but they often have connections to a main idea.

Over time, your vocabulary will grow - just like a tree over the years.

And with hard work, you will be able to use your growing vocabulary when different speaking opportunities "spring up."

weed – n. : a plant that grows very quickly where it is not wanted and covers or kills more desirable plants

client –n. a person who pays a professional person or organization for services

vocabulary – n. all of the words known and used by a person

branch – n. a part of a tree that grows out from the trunk

theme – n. the particular subject or idea on which the style of something is based ; the main subject that is being discussed or described in a piece of writing, a movie, etc.