< Pfizer Studies Israel’s Coronavirus Vaccination Campaign
Update Required To play the media you will need to either update your browser to a recent version or update your Flash plugin.
By Mario Ritter Jr.
12 February 2021

Reporters with the Reuters news agency spoke to leading scientists in Israel and other places, Israeli health officials, hospital heads and two of the country's largest healthcare providers. The aim was to find the latest information about the country's especially fast vaccination campaign.

About 3.5 million Israelis have been fully or partly vaccinated. That is more than half of people who are in groups that are supposed to be vaccinated first. These groups are showing a sharp drop in infections. 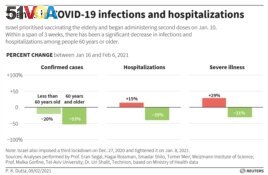 Eran Segal is a data scientist at the Weizmann Institute of Science in Rehovot, Israel. He said there was a 53 percent reduction in new cases in the first fully vaccinated group. In addition, there were 39 percent fewer hospitalizations and a 31 percent drop in severe illnesses from the middle of January until February 6, Segal said.

More information will be known in two weeks, as teams study the vaccine's effectiveness in younger groups of Israelis and people with certain conditions.

"We need to have enough variety of people in that subgroup and enough follow-up time so you can make the right conclusions, and we are getting to that point," said Ran Balicer. He is an official with the Israeli health services provider Clalit.

Pfizer is watching the Israeli effort each week to understand more about the vaccine and how it is working.

Israel's campaign provides Pfizer and its partner, Germany's BioNTech, with an unusual chance. The small country has healthcare for all its citizens, and the ability to gather and study data. Israel also has quickly provided the vaccine to its citizens.

Israel still faces struggles in its effort to fight the virus. The country's third national lockdown has not slowed the spread of COVID-19. A fast-spreading variant of the virus that was first found in Britain is now spreading in Israel. So far, the Pfizer/BioNTech shot appears to be effective against it.

"We've so far identified the same 90 percent to 95 percent efficacy against the British strain," said Hezi Levi. He is a director-general of the Israeli Health Ministry.

The Pfizer vaccine requires two doses, or shots, to be effective. For this reason, Levi said it is too early to know about levels of protection because many people only received the second dose in the last week. He added that it is still too early to know whether the vaccine is effective against another fast-spreading virus variant that began in South Africa.

Israel began its vaccination program on December 19. It paid a high price for supplies of the Pfizer/BioNTech vaccine.

After that, Israel decided to begin giving shots to people over the age of 60. Over time, it has opened the program to the rest of the population.

Information gathered by Israeli healthcare provider Maccabi shows that only six out of every 10,000 people got infected with COVID-19 one week after receiving their second Pfizer dose. By 22 days after full vaccination, no infections were recorded.

Pfizer says its vaccine's effectiveness starts one week after the second dose is given.

One important question is whether vaccines can end the pandemic. Michal Linial is a professor of molecular biology and bioinformatics at Jerusalem's Hebrew University. She said data from the past suggests that viruses become endemic and seasonal.

She added, "The virus is not going anywhere."

variety –n. a number or collection of different things or people

dose –n. the amount of medicine or vaccine needed to cure or help a condition

contagious –adj. able to be passed from one person or animal to another

endemic –n. common to a place