< Peruvians Re-Weave 500-year-old Bridge
Update Required To play the media you will need to either update your browser to a recent version or update your Flash plugin.
By Dan Novak
19 June 2021


Peruvians from the Huinchiri community are rebuilding an ancient Incan hanging bridge. They are using the same traditional weaving techniques used to build the bridge 500 years ago.

The Q'eswachaka bridge communities are divided by the Apurimac river in the Cusco region. The most recent bridge had been used for more than half a century. But during the COVID-19 pandemic it was neglected. It collapsed in March.

Members of the affected communities, like the Huinchiri, decided to rebuild the 30-meter long bridge. They are building it using the traditional Incan style: by weaving it. 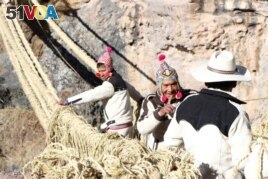 Teams of workers started from both sides of the river. They balanced on large main ropes stretched over the water. Working towards the center, they placed smaller ropes as barriers between the handrail ropes and the bridge's floor.

Jean Paul Benavente is the governor of Cusco.

"Last year because of the pandemic, it wasn't strengthened ... That is why at the beginning of this year the bridge fell," he said. "But now it is like an answer to the pandemic itself.

Benavente said that the rebuilding means "we can tell the world that we are coming out if this little by little."

In 2013, UNESCO recognized the skills and traditions used to build the bridge as Intangible Cultural Heritage of Humanity.

Peru is rich in ancient culture. It has hundreds of places representing many cultures that date back thousands of years. The ancient Incan empire was in power when Spanish explorers arrived in the early 1500s.

"The Q'eswachaka, this Incan living bridge, is really an expression and cultural manifestation," Benavente added. This bridge "connects villages, but that also connects traditions and connects culture."

Dan Novak adapted this story from reporting by Reuters. Susan Shand was the editor.

weave — v. to create something (such as a story) by combining different things in usually a complicated way

neglect — v. to fail to take care of or to give attention to (someone or something)

intangible — adj. not made of physical substance : not able to be touched : not tangible