< People Rediscover Old Hobbies During Pandemic
Update Required To play the media you will need to either update your browser to a recent version or update your Flash plugin.
By Susan Shand
15 February 2021


He sits quietly at his table, looking closely at his miniature World War II tank. His hands are steady as he works to make the piece of plastic look as real as possible.

And it does look real, but very small. The project is the work of Maxime Fannoy, a Belgian husband and father dealing with pandemic restrictions that keep him at home with his family.

The old traditional hobby of creating miniature models is returning, whether they are trains, tanks or dollhouses. Families are sitting down together and creating little worlds. 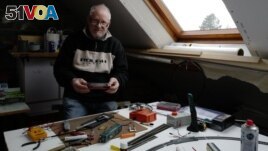 Sales are increasing among companies that make model kits. British company Airfix saw a major increase in its plastic kits for Spitfires, the famous World War II fighter plane. Airfix is owned by Hornby, which also makes model trains and cars under other names. The business has become profitable again, with sales rising sharply.

The simple pleasure of gluing and painting are pulling some younger people away from their phones and computers. Suddenly, they find they have more time. So many have begun taking up the hobbies enjoyed by their parents and grandparents.

In France, 70-year-old Guy Warein says he has rebuilt an old model train that had been stored away. His grandchildren love it and have returned from "the virtual world to reality."

He said his grandson said to him: "Come on Grandpa, let's go and see the trains and make them work again.' So, we put them together and did things together," he says. "It's a coming together of generations."

He repaired the old miniature trains and put down a large track. He is designing a new path for the trains to travel through. The hobby has helped him forget about the pandemic and the social problems caused by COVID-19.

"You fill your time and forget what's happening around you," Warein said.

Manufacturers have worked hard to meet the growing worldwide demand. Lyndon Davies is Hornby's chief executive officer. He had to fly 10,000 Spitfire kits to England from a factory in India when the company ran out of supplies for the first time in its 71-year history.

"This pandemic has really brought families together at home," he said.

Peco is another British manufacturer. It has hired new employees to meet the increased demand. Orders to the company are up 50 percent in some markets. People want miniature trains and tracks as well as the small buildings and trees that sit on the track.

"This is happening everywhere: Our markets in the UK, across Europe, in Australia, North America, in China," said sales manager Steve Haynes. "People are making far greater use of their...free time...and do something creative."

In Belgium, Fannoy calls himself a "model-maker made from lockdown." When the pandemic shut down his busy life and forced him to do business from home, he began working on some model kits he had long ago hidden away in his house for future free time.

He first completed several 1/24th-scale racing cars. A WWII tank has been painted to look old and is displayed in a winter environment with troops and other vehicles. He posted photos of the diorama on Facebook. It represented 50 hours of work.

"I generally start in the evenings at around 8 p.m. and stop around 11 p.m. to midnight," Fannoy says. "I can no longer do the things I would normally do...I open a kit and work on it. In fact, it's my wife who comes and pulls me out of this mini-world I live in."

Fannoy added: "It's a form of meditation."

steady – adj. still and not shaking

hobby – n. an interest or activity engaged in for pleasure

kit – n. equipment or materials needed or used for a special purpose

glue – v. a substance used to stick things together

virtual – adj. taking place online or through computers instead of happening physically

meditation – n. to think calm thoughts for a long period in order to relax

diorama – n. a model that shows a situation, such as a historical event or animals in their natural environment