< Peaceful Power Transition Possible in DRC
Update Required To play the media you will need to either update your browser to a recent version or update your Flash plugin.
By VOA
Aug 17, 2018


The Democratic Republic of the Congo will hold an election in December, hopefully leading to a peaceful democratic transfer of power for the first time in the country's history.

Sitting President Joseph Kabila came to power in 2001, having succeeded his father, Laurent Désiré Kabila, after his assassination. Joseph Kabila was elected as President in 2006 for a five-year term, and re-elected in 2011. Though his second term ended in 2016 and the DRC constitution prevents him from seeking a third term, elections were not held and Kabila remained in power. 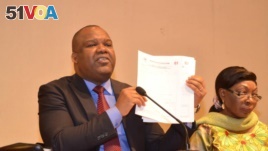 Corneille Nangaa, the president of the Independent National Electoral Commission (CENI) at the closing of applications for presidential and national elections, Kinshasa, DRC, August 4, 2018

Following protests in September 2016, Kabila's ruling party and the opposition signed an agreement, known as the Saint Sylvestre Agreement, on December 31, 2016. The Agreement paved the way for elections, prohibited Kabila from running for re-election or changing the constitution, and committed the DRC government to a number of “confidence building” measures intended to create the political space necessary for credible elections.

In November 2017, DRC's National Independent Electoral Commission finally announced for December 23, 2018. Many feared President Kabila would nevertheless attempt to run for an illegal third term but those fears were allayed on August 8, the deadline for registering presidential candidates, when the DRC government spokesperson announced that Kabila would not seek re-election.

“In the Democratic Republic of Congo, the ruling coalition's announcement of a consensus candidate other than President Kabila represents a significant step forward for Congolese democracy,” said State Department Spokesperson Heather Nauert in a written statement.“We are encouraged by this sign that Kabila intends to uphold his commitments to the Congolese constitution and the terms of the December 2016 St. Sylvestre agreement by not seeking a third term.

“Government, opposition, and civil society leaders, along with the heads of the security services share with President Kabila the responsibility of ensuring full respect for democratic norms. The Congolese people must be free to express their views and choose from the candidates without fear of violence, threats, or intimidation. We call on DRC's National Independent Electoral Commission and Congolese authorities to take the necessary steps to guarantee credible elections on December 23, 2018,” said Heather Nauert.

“The DRC has an historic opportunity to ensure a peaceful transfer of power in December, and the United States looks forward to supporting this process in accordance with the established electoral calendar.”