< Pathway Offers Hope for Brazil’s Golden Lion Tamarins
Update Required To play the media you will need to either update your browser to a recent version or update your Flash plugin.
By Jonathan Evans
16 December 2021


Environmentalists in Brazil's Rio de Janeiro state are concerned about a recent drop in population numbers of the threatened golden lion tamarin. So, they have built a bridge across a busy roadway to help the monkeys move around a wider forested area.

The Atlantic Forest of Rio de Janeiro state is the only place in the world where the golden lion tamarin still exists in the wild.

Conservation efforts have increased their numbers, bringing the animals back from near total loss. But an outbreak of yellow fever disease in 2018 killed off 32 percent of the population. Today, there are an estimated 2,500 golden lion tamarins in the wild. 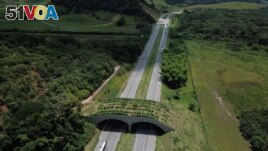 An ecological bridge that serves as a corridor for the endangered Golden Lion Tamarin is seen over an interstate highway in Silva Jardim in Rio de Janeiro state, Brazil December 2, 2021. (REUTERS/Pilar Olivares)

The environmentalists were especially fearful for a group of monkeys that had become isolated, or separated, from other tamarins. They became separated because of a roadway.

Luis Paulo Marques Ferraz is executive director of the project that works to protect the numbers of golden lion tamarins. He told Reuters, "Scientists have shown that the population living there would be completely isolated from the other side of the road and that would create a real problem in terms of conservation."

"Genetically that population would be isolated and that is really bad. We need a large forest protected and connected," he added.

The bridge was built last year. It has been planted with trees and other plants in hopes of making a natural pathway that appeals to the tamarins. The plant-life is still young and will take time to grow to a size usable for the monkeys.

Ferraz said that a population of 2,000 golden lion tamarins should have at least 25,000 hectares of forest. But the forest is broken up by open fields, roads and towns. Conservation groups estimate that the golden lion tamarin has lost about 95 percent of its original environment in Brazil.

"That's why this bridge here was so strategic and important for the conservation program," Ferraz said.

Sebastian Rocandia reported on this story for the Reuters news service. Jonathan Evans adapted this story for Learning English. Ashley Thompson was the editor.

conservation – n. the protection of animals, plants, and natural resources

original – adj. happening or existing first or at the beginning

strategic – adj. of or relating to a general plan that is created to achieve a goal in war, politics, etc., usually over a long period of time