< ‘Pandora Papers’ Reveal New Secrets of World’s Wealthiest People
Update Required To play the media you will need to either update your browser to a recent version or update your Flash plugin.
By Dan Friedell
04 October 2021


A new report shows how world leaders, powerful politicians, billionaires and others have used secret accounts to hide property worth trillions of dollars.

The report by the International Consortium of Investigative Journalists (ICIJ) brought promises of tax reform and demands for resignations and investigations. Explanations and denials from those targeted followed.

The investigation, named the Pandora Papers, was published Sunday night. It involved 600 journalists from 150 media groups in 117 countries. 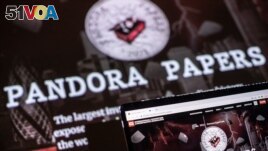 The reporters examined accounts based in traditional island havens like the British Virgin Islands, Seychelles, Hong Kong and Belize. But, the investigation also found such accounts hidden in less expected places, including the U.S. states of South Dakota and Florida.

Tax advisers helped the world's wealthiest and most powerful people hide their ownership of the properties to avoid tax requirements. While many of the accounts are legal, they are ethically questionable.

Critics say the property owners should have paid taxes on their sales and purchases. Sven Giegold is a member of the European parliament. He said: "Global tax evasion fuels global inequality."

Oxfam International is a British aid group. In a statement, it said the missing tax dollars result in fewer public projects, like hospitals and schools.

"This is where the pay-packets sit of all the extra teachers and firefighters and public servants we need," Oxfam wrote.

The report follows from an earlier investigation called the "Panama Papers." The Panama Papers showed the true owners of secret bank accounts in places such as the American state of Nevada, the British Virgin Islands and Singapore. The ICIJ says the Panama Papers led many politicians to leave office and countries around the world to demand over $1 billion in unpaid taxes.

After Sunday's report, the European Commission said it will propose new laws that will make it harder for people to avoid paying taxes.

The newest report covers activity from as long ago as the 1970s, but most is from the last 25 years.

The ICIJ shows that King Abdullah created over 30 companies from 1995 to 2017 to secretly buy 14 homes worth more than $100 million. One is a $23 million property on the California coast.

In a statement, the King denied any wrongdoing and said the secrecy was necessary for security reasons. King Abdullah's lawyers said he is not required to pay taxes under his country's law. They also said most of the companies and properties are not connected to the King or no longer exist. They did not provide details, however.

The report also detailed a purchase of a company by former British Prime Minister Tony Blair. He took over a building in London valued at almost $9 million. But instead of buying the building, Blair purchased a company that owned the building. The company was owned by a politician from Bahrain. The investigation showed this saved the Blairs more than $400,000 in taxes.

The Blairs said they did not know who owned the company, which they said is now closed.

Another property deal in Britain is being studied. The "Pandora Papers" report looked at a purchase of a building valued at $91 million by The Crown Estate, a property business owned by Queen Elizabeth. The Guardian, a British newspaper, said the purchase should be investigated for possible money laundering.

The building was owned at the time by Ilham Aliyev, the president of Azerbaijan. Aliyev has been accused of corruption during his term, which started in 2003.

President Khan of Pakistan is not accused of any wrongdoing. However, officials close to him, including the country's finance minister, Shaukat Fayaz Ahmed Tarin, are accused of hiding millions of dollars in wealth in secret companies or trusts.

In reaction, Khan said his government will investigate every Pakistani citizen named in the papers.

The ICIJ report also showed Babis, of the Czech Republic, put $22 million into a company so he could buy a large home in southern France in 2009. He did not document the company or the home as required by law.

Babis said he did nothing wrong and that the report came out just in time to hurt him before the Czech election later this week.

Cory Doctorow is a writer and activist. He wrote about the news on Twitter, noting: "The legality is the true scandal," and called the companies that hold the costly properties "a fiction."

Gabriel Zucman, an economics professor at the University of California, Berkeley believes the solution is easy to understand: Ban "corporations with no economic substance, whose sole purpose is to avoid taxes or other laws."

U.S. Senator Sherrod Brown, of Ohio, said the laws as they are currently written permit "wealthy elites to avoid paying their fair share while working families are forced to make up the difference."

Dan Friedell adapted this story for Learning English based on a report by The Associated Press. Caty Weaver was the editor.

Do you think people who avoid taxes be punished? Tell us in the Comments Section and visit 51VOA.COM.

trust – n. an arrangement in which someone's property or money is legally held or managed by someone else or by an organization (such as a bank) for usually a set period of time

haven – n. a place where you are protected from danger, trouble, etc.

money laundering – n. moving money obtained illegally so that it looks like it was earned legally

scandal – n. an occurrence in which people are shocked and upset because of behavior that is morally or legally wrong

fiction – n. something that is not true

sole – adj. only or single

elite – n. the people who have the most wealth and status in a society : the most successful or powerful group of people