< Pandemic Does Not Slow China’s Love for US Lobster
Update Required To play the media you will need to either update your browser to a recent version or update your Flash plugin.
By Dan Novak
23 January 2022


The American lobster industry has greatly slowed down because of trade difficulties linked to the COVID-19 pandemic.

But those issues have not done much to slow China's love for lobster. The demand rose during the 2010s in part because of the expansion of China's middle class. 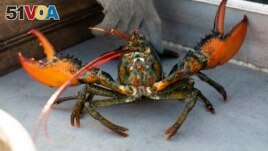 In this file photo, a lobster shows its claws after being caught off Spruce Head, Maine, on August 31, 2021. (AP Photo/Robert F. Bukaty, File)

Lobsters are especially desired in China during the winter. The tasty sea creatures are often eaten on Chinese New Year, which will be celebrated this year on February 1.

American exporters sent more than 6 million kilograms of lobster to China during the first 11 months of 2021, The Associated Press reports. That was a 6 percent increase over the same period in 2020.

The pandemic has made the already hard job of sending live seafood across the world even more difficult. But Maine lobster exporters are expecting a good amount of business for Chinese New Year, Bill Bruns told the AP. Bruns oversees The Lobster Company in Arundel, Maine.

He said the shipping process is more difficult now because the company cannot send lobsters directly to Beijing because of COVID-19 restrictions. But they are still able to send lobsters to other airports, such as Shenzhen.

"Chinese New Year was always a crapshoot the last couple years," Bruns said. "But I'm prepared for it. I have the staff. Because otherwise it's going to be a long spring."

China buys lobsters from the U.S. – where the industry is mostly based in Maine – as well as Canada. Exports from Canada were up even more than the U.S. during the first 11 months of 2021, said John Sackton. He is an industry expert and the creator of SeafoodNews.com.

Sackton said the seafood industry could also gain business from the Beijing Winter Olympics, which are set to begin February 4. And he said he expects lobster sales during the Chinese New Year to be higher than last year.

The U.S. lobster industry had similar difficulties during the first year of the pandemic in 2020. But companies still reported a strong export season during that year. While the value of exports in 2020 was down from a record year in 2018, it still added up to more than $100 million.

High lobster prices have raised the value of exports this year. Business publisher Urner Barry reported the price for a live 1.25-pound hard shell lobster was $11.25 per pound in New England this month. That was more than one-third higher than in January 2021.

To send lobsters to China, American and Canadian fishermen have to trap them in the cold waters of the Atlantic Ocean. Bad weather has made that difficult in Maine this year. But fisherman are still having a productive winter on the water, said Kristan Porter. He is president of the Maine Lobstermen's Association.

"When guys get out there, they are doing OK," Porter said. He added: "It takes someone hardier than me to fish the wintertime."

crapshoot — n. something that could produce a good or bad result

staff — n. the people who work for an organization