< One Officer Killed in Violent Incident at US Capitol
Update Required To play the media you will need to either update your browser to a recent version or update your Flash plugin.
By Hai Do
02 April 2021


A police officer was killed and another injured after a man struck them with a car at the U.S. Capitol Building on Friday.

The man got out of the vehicle with a knife and continued to attack the officers stabbing one of them. The man was then shot by Capitol Police officers.

Capitol Police Acting Chief Yogananda Pittman told reporters, "The suspect exited the vehicle with a knife in hand" and "lunged" at the officers. She added, "This has been an extremely difficult time for U.S. Capitol Police after the events of Jan. 6."

Both officers were hospitalized and one died from the injury. The suspect also died at a hospital. Officials have yet to identify the officer who died or the suspect.

However, they said that there was no longer an ongoing threat and that the attack did not appear to be related to terrorism.

No connection has been established between Friday's incident and the January 6 attack at the Capitol. Five people died in that incident including Capitol Police Officer Brian Sicknick. 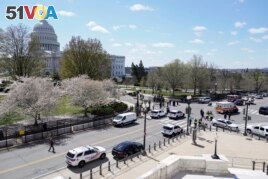 Police officers surround the scene after a car that crashed into a barrier on Capitol Hill on the Senate side of the U.S. Capitol in Washington, Friday, April 2, 2021. (AP Photo/J. Scott Applewhite)

Friday's incident took place at a security barrier about 91 meters away from an entrance to the Capitol Building. Congress is not in session as many lawmakers and employees are away for the Easter holiday weekend.

It comes as the capital city of Washington, DC is still recovering from the attack on Congress in January. A mob attacked the Capitol as Congress was voting to certify Joe Biden's presidential win.

Officials set up barriers and fences around the Capitol after the riot. But they have begun removing some of the emergency measures in recent weeks.

People in the Capitol complex were ordered to remain in place after Friday's shooting. Workers were told they could not enter or exit buildings. Video showed National Guard troops gathering near the area where a dark-colored vehicle had crashed into a barrier.

President Joe Biden had just left the White House for Camp David outside of Washington when the incident occurred. He is expected to receive an update on the incident.

Attorney General Merrick Garland has been notified about the incident. The FBI said in a statement that it is providing support to the Capitol Police.

Hai Do wrote this report for VOA Learning English. Mario Ritter Jr. was the editor.

lunge –v. to move or reach forward suddenly in a forceful way

certify –v. to officially say that something or someone has met certain requirements