< One of the World’s Best Restaurants Is Taking Meat off the Menu
Update Required To play the media you will need to either update your browser to a recent version or update your Flash plugin.
By Dan Friedell
14 May 2021


The New York City restaurant Eleven Madison Park is one of the best in the world.

It has three Michelin stars. There are about 130 restaurants in the world with three stars from the famous French guide.

A meal at Eleven Madison Park, for two people, with wine, costs about $1,000. And when the restaurant re-opens on June 10 after the year-long pandemic, it will not serve meat, fish, or other animal products.

Owner and chef Daniel Humm recently told the U.S. radio broadcaster NPR that the restaurant will be "100 percent plant-based." He said the way people eat meat is "not sustainable. And that is not an opinion. This is just a fact." Humm also said he will not serve butter or cheese. He will, however, offer honey and milk to go with tea and coffee. 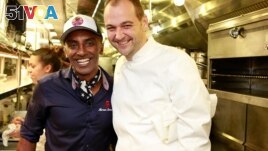 Epicurious is a website that centers on food and cooking. In late April, the site announced that it will not write about beef or cooking instructions for meals with beef.

The move, it said, is "an effort to encourage more sustainable cooking." Raising cows for beef, the site said, led to more greenhouse gas than feeding other animals or planting vegetables for food.

Researchers at Tulane University in New Orleans, Louisiana agree. In a 2019 study, they wrote that food production causes about 25 percent of the world's carbon pollution. They suggested that if Americans would eat chicken instead of beef for just one meal per day, they could reduce pollution by about half.

The question is, will other restaurants follow in the footsteps of a famous place like Eleven Madison Park?

Nevin Martell is a food writer in Washington, D.C. He told VOA that Eleven Madison Park is special.

"They've always done things a little bit differently and, you know, I think that this is a big bold move for them. But I also think that it's, they're positioning themselves at the right time to be doing the right thing and I don't think it's as much of a risk as people might think that it is."

Martell added that people do not come to Eleven Madison Park to eat meat. They come for a once-in-a-lifetime experience. He does not think the change will keep people from coming to the restaurant.

Haidar Karoum is the chef at Chloe, a Washington, D.C. restaurant. The restaurant serves meat, chicken, fish and vegetables, based on what items are available in different times of the year. Recently, he said customers have been more interested in vegetables.

"Vegetarian dishes have become far more popular than they were, let's say, 10 years ago. So because of that, because of customer demand, and just for the sake that I actually like cooking vegetarian things, if you looked at the menu, you'll find a lot of options for vegetables."

But that does not mean he could make Chloe's menu vegetarian overnight. Eleven Madison Park can, Karoum said, because the New York restaurant is so famous that people are "willing to travel the world just to eat in the restaurant, regardless of the cuisine."

Karoum feels he has some responsibility to help the environment. He works with a cheese maker in Pennsylvania, about two hours from Washington, to transport cheese, apples, pork and honey from different places to the restaurant. That helps reduce the amount of pollution Chloe adds to the environment. 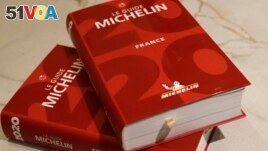 The Michelin guide lists some of the best restaurants in the world. (AP Photo/Christophe Ena)

Other ways to help the environment

Even if restaurants cannot change their offerings completely like Eleven Madison Park, Martell suggests that they can still find ways to reduce their pollution and waste.

Almost one-and-a-half years into the coronavirus pandemic, most restaurants are just trying to stay in business. As a result, Martell said:

"Reopening a place that people have been craving for 14 months, and then not giving them what they've wanted for 14 months is also a tough thing to ask of a restaurateur."

What do you think about going to a costly restaurant that only serves vegetables? Tell us in the Comments Section and visit 51VOA.COM.

sustainable –adj. involving methods that do not completely use up or destroy natural resources

chef – n. a professional cook who usually is in charge of a kitchen in a restaurant

greenhouse gas -n. a gas that causes the warming of the Earth's atmosphere

bold –adj. not afraid of danger or difficult situations

vegetarian –n. a person who does not eat meat

dish –n. food that is prepared in a particular way

sake–n. used with ‘for' to signify the benefit of something, done to help a person or a thing

option -n. something that can be chosen : a choice or possibility

cuisine –n. a style of food

crave –v. to have a very strong desire for (something)