< Hmong-American Olympic Champion Sunisa Lee Looks Toward College
Update Required To play the media you will need to either update your browser to a recent version or update your Flash plugin.
By Susan Shand
30 July 2021

Her future plans, however, have not changed.

Lee narrowly defeated Brazil's Rebeca Andrade for the gold medal in the women's all around. 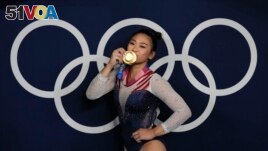 Sunisa Lee, of United States, reacts as she poses for a picture after winning the gold medal in the artistic gymnastics women's all-around final at the 2020 Summer Olympics, Thursday, July 29, 2021, in Tokyo, Japan. (AP Photo/Gregory Bull)

Just one day after her victory, Lee said she is ready to start her student life at Auburn University in the southern U.S. state of Alabama. She plans to compete for the college's gymnastics team.

First-year students are expected to report to their dormitory rooms on August 11. Lee told The Associated Press she plans to be there.

"(College) just has been another one of my dreams and goals after the Olympics," the 18-year-old said Friday. "So, I feel like if I were to going to go pro, it would have to be like something like really good," she added.

To "go pro" means to become a professional athlete. Until recently, going pro was the only way Lee could have accepted major product endorsements.

The past four Olympic champions in the women's gymnastics all-around have been American: Carly Patterson, Nastia Liukin, Gabby Douglas and Simone Biles. They, like Lee, were teenagers at the time of their victories.

None of them competed in college sports. Instead, they chose to go professional to make money from their newfound fame. But things were different then. Gymnasts had to choose between high-paying endorsements and college sports scholarships.

However, recently passed legislation permits college athletes to make money off their name, image and likeness.

There will be no shortage of possibilities for Lee to earn money. She is the first Hmong American to win an Olympic medal. She has huge support from the Hmong community in the United States and around the world.

Whatever comes next, however, she plans to be competing for Auburn's gymnastics team next spring.

Jeff Graba said Lee can compete in college while also enjoying the financial rewards from being a gold medalist in one of the most popular Olympic sports. That is something no other American Olympic champion has been able to do before.

When she starts her college life in Alabama, Lee will leave behind her family and Hmong community in the state of Minnesota.

There are about 250,000 Hmong people in the United States. Most live in California and Minnesota. The Hmong community came to the U.S. as refugees in the late 1970s, mostly from Laos, at the end of the Vietnam War.

Lee's parents and family members joined a huge crowd of supporters in Minnesota Thursday to watch Lee compete. Her family could not travel to Tokyo because of the COVID-19 pandemic.

Her father, John Lee, told the AP, "I can't find the words to express how happy we are, how important that was to me and my family and to the whole Hmong community throughout the world."

He added, "We never expected gold, but she came through. She did it."

Lee Pao Xiong is director of the Center for Hmong Studies at Concordia University in St. Paul, Minnesota. He said Lee represents a special kind of American.

The Associated Press and the Minneapolis Star reported this story. Susan Shand adapted it for Learning English. Ashley Thompson was the editor.

gymnastics - n. a sport in which athletes are judged on how well they perform various physical exercises on a mat or on special equipment

dormitory – n. building on a school campus that has rooms where students can live

endorsement – n. a public or official statement of support or approval, sometimes for payment

scholarship – n. an amount of money that is given by a school, an organization, etc., to a student to help pay for the student's education