< Offices Redesign: Touchless Coffee and Social Distancing
Update Required To play the media you will need to either update your browser to a recent version or update your Flash plugin.
By John Russell
12 October 2020


Many people in the United States are returning to changed workplaces after months of lockdowns. New social distancing and cleaning requirements are being put into effect in some places.

One big difference is in break rooms, where workers used to drink coffee and talk. Food companies, such as Keurig Dr. Pepper, Lavazza and Nestle have released new technology for these rooms in the time of COVID-19, the disease caused by the coronavirus.

Nestle said it has worked with manufacturers to change its coffeemakers. The machines let users choose their drinks by holding a finger over a screen. But they do not touch it.

Lavazza recently released a new coffeemaker that works with a mobile application, or app. It can make cappuccinos and lattes—special kinds of coffee drinks—without people having to touch the machine.

U.S. coffee machine manufacturer Bunn has a different idea. It has added a QR code, a special kind of code, to its current machines. The new code lets users order drinks through a web site.

Supplying offices with coffee beans and coffee makers is a big business in the United States. Last year, the business research company Packaged Facts said that the market was valued at $5.7 billion. These coffee companies have had sales fall during coronavirus lockdowns. But, they hope to improve business by making changes. The goal is to reduce workers' and employers' concerns.

Some studies suggest offices will fill up very slowly. Offices might never return to the same number of workers that they had before the coronavirus health crisis.

GoodFirms is a research company based in Washington D.C. The company said recently that its international study of 168 businesses showed that nearly one third of workers had returned to their offices. Nearly 60 percent wanted to do so; but, more than half remained concerned about their safety.

Alicia LeBeouf is a marketing and sales official at food service company Canteen. She said changes to office food services were important for dealing with such concerns. 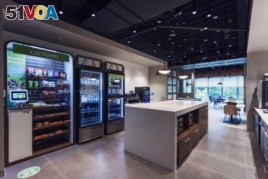 New touchless payment terminals for snack and vending machines are seen at Canteen's headquarters in Charlotte, North Carolina, U.S. in this undated handout image. Canteen is a division of Compass Group. (Canteen/Handout via Reuters)

Cooks who prepare meals have been replaced by food stations at large companies such as Verizon and UnitedHealth Group Inc. Microsoft Corporation has begun using touchless coffee machines. At Mohawk Industries, refrigerators have special, foot-operated doors.

Offices need to change, said Tom Vecchione. He helps plan workplaces at the architecture services company Vocon in New York City. The company is taking down doors and removing screens in offices. The goal is to create larger common areas that make social distancing easier.

The company also is replacing chairs with stools to discourage people from staying in one place for too long.

Canteen's LeBeouf said employers are planning for the return of workers. But, those workers would not be returning to the same office that they left before the coronavirus health crisis.

"We've had to...rethink everything," LeBeouf said.

Nivedita Balu and Siddharth Cavale reported on this story for Reuters. John Russell adapted it for Learning English. Mario Ritter, Jr. was the editor.

code -- n. a set of letters, numbers, symbols, etc., that identifies or gives information about something or someone

screen – n. a large, thin piece of wood, paper, or cloth that is set in a frame and used to separate one room or part of a room from another

stool –n. a small seat that fits only one person and has not back or arms

discourage – v. to try to make people not want to do (something)