< Ocean Scientist Calls Extent of DDT Dumping in Pacific ‘Staggering’
Update Required To play the media you will need to either update your browser to a recent version or update your Flash plugin.
By Dan Friedell
05 May 2021


Southern California's Catalina Island is a popular destination for nature lovers. It is reachable by boat from Los Angeles and San Diego. With just one city, most of the small island is a government-protected wild area.

But, a report last October in the Los Angeles Times newspaper raised public concern about the water surrounding Catalina.

The newspaper discovered that industrial companies for years had been dumping the insect poison DDT into the ocean near Catalina. The practice began in the 1940s and ended in the 1970s.

The newspaper report led to a search and study of the area by scientists at the Scripps Institution of Oceanography at the University of California San Diego (UCSD). 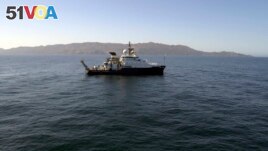 The research team discovered about 25,000 large containers, or barrels, below the surface of the Pacific Ocean. The scientists suspect the barrels hold DDT, and other chemicals used to make the poison.

Eric Terrill leads the Scripps program that worked on the project. He said the barrels were spread over a very large area. That finding was a "surprise," Terrill said.

The Scripps examination also showed the companies responsible for the chemical dump disobeyed rules about where to place the barrels.

The researchers mapped about 15,000 hectares of ocean floor where past studies had shown evidence of poisonous chemicals. The area lies between coastal Los Angeles and Catalina.

The long-term effect on ocean life and humans is still unknown, said Scripps chemical oceanographer and professor of earth sciences Lihini Aluwihare. She was not connected to the study. But, in 2015, she co-wrote another study that found high amounts of DDT and other chemicals in the blubber, or fat, of bottlenose dolphins.

Aluwihare said some studies among humans show that DDT-linked health problems have been passed from parents to children. So she said, it is possible than non-human animals will do the same.

"Simply put," she said, "this is one of the biggest environmental threats on the West Coast." She noted that the problem is made especially complex because the barrels are so deep in the ocean and there are few records about the dumps. The lawmaker also noted that the Scripps team's findings may represent only a small part of the total dumped material.

DDT was widely used around the world to kill insects that hurt crops and carry disease.

But the U.S. government banned the chemical in 1972 after it was found to be harmful to humans. Most other countries did the same.

DDT has been found in several ocean animals off the Southern California coast. Earlier research shows the poison causes cancer in sea lions.

Now, the scientists will further study some of the barrels and the bottom of the ocean where they were found.

Diana Aga is a chemistry professor at the University of Buffalo. If the barrels are leaking, she said, the amount of the chemical in the area would be "shocking."

"There's a lot of DDT at the bottom of the ocean," Aga said. But, she said if the barrels have not leaked, they could be moved to a safer area.

The Scripps Institution of Oceanography study took place from March 10 to March 24. The researchers said they did the study as a way to aid clean-up efforts.

Julie Watson wrote this story for The Associated Press. Dan Friedell adapted it for Learning English. Caty Weaver was the editor.

destination –n. a place to which a person is going or something is being sent

dump –v. to get rid of (waste or garbage) especially in a secret and illegal way

practice –n. something that is done often or regularly

What would you do with the chemicals dumped in the ocean? Tell us in the Comments Section and visit 51VOA.COM.