< Oat Milk Maker Raises $1.4 Billion in Stock Sale
Update Required To play the media you will need to either update your browser to a recent version or update your Flash plugin.
By Gregory Stachel
25 May 2021


Oatly is the world's largest maker of oat milk, a vegetable-based drink made from oats. The company is based in Malmo, Sweden. Now, it is getting a lot of attention from investors.

Last Thursday, Oatly raised $1.4 billion on the Nasdaq stock exchange when the company offered shares to the public for the first time. Oatly first priced its shares at $17 each. The company was then valued at nearly $10 billion. When shares began trading Thursday, the price of shares jumped 24 percent to $21 each.

The stock sale is the latest example of the fast rise of oat milk. The food is winning buyers and gaining the interest of famous investors like Oprah Winfrey. People like the oat milk message that says it is healthier and better for the environment than cow's milk.

Oat milk was once a product meant for a small number of people who got bad reactions to drinking cow's milk. Oatly's products can now be found at major American stores like Starbucks and Target. It is also sold online by Alibaba in China.

The company thinks there is more growth ahead. Market researcher Euromonitor found worldwide sales of such plant-based products reached $18 billion in 2020. That represents three percent of the $600 billion market for milk-based, or dairy, foods.

Oatly said more people are trying its oat-based drinks, yogurt and ice cream. In the last three months, between 35 and 40 percent of adults in the United States, the United Kingdom, Germany, China and Sweden bought a plant-based milk product.

Nielsen is an American marketing research company. It says the sale of oat milk jumped 131 percent during the last year. 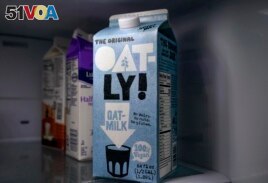 Oatly's chiefToni Petersson said he is sure oat milk will be popular for a long time.

Cara Rasch is a researcher with Packaged Facts. She said many buyers also see it as a healthier choice compared to cow's milk. Cow's milk and oat milk have different nutritional qualities.

An Oxford University study from 2018 found oat milk production has fewer bad effects on the environment than other plant-based milk products. For example, California almond milk production requires a lot of water because the almond trees grow in dry areas of California.

Speaking of the good effects of his products, Oatly's Petersson said, "We're here to make the world better. I know it sounds stupid, but it's true."

Dee-Ann Durbin reported this story for the Associated Press. Gregory Stachel adapted it for VOA Learning English. Mario Ritter, Jr. was the editor.

oat – n. a kind of grain that is widely grown

yogurt –n. a food made from milk that becomes a semi-solid because of the action of bacteria

almond – n. a kind tree seed or nut that has a slightly sweet taste