< NY Philharmonic Cancels Season, Plays Along City Streets
Update Required To play the media you will need to either update your browser to a recent version or update your Flash plugin.
By Caty Weaver
16 October 2020


The New York Philharmonic made the historic decision this week to cancel its entire performance season.

The president of the famed symphony orchestra Deborah Borda said on Tuesday that it had lost a combined $30 million in ticket sales for this season and next. The orchestra's total budget for the 2019-2020 season is $87 million.

Borda said the company raised more money than expected from individual donors. But that money, "cannot make up for those massive amounts of lost ticket revenue," she said.

"Because we live on earned ticket revenue."

The New York Philharmonic is the oldest orchestra in the United States at 178 years old. It is part of the country's so-called "big five" symphonies. It has continued its performance seasons through crises including the Civil War, Great Depression, the September 11th terror attacks and even other disease outbreaks.

But the spread of the new coronavirus, and restrictions related to it, has brought the organization to its breaking point.

The full Philharmonic has not performed since March 10. It announced on June 10 that it had canceled the autumn part of the 2020-21 season and would restart normal performances in early January. 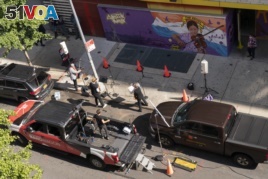 Members of the NY Phil Bandwagon perform outside the Casita Maria Center For Arts & Education in the Hunts Point neighborhood of the Bronx borough of New York, Friday, Oct. 2, 2020. (AP Photo/Mary Altaffer)

Some have continued to perform in less formal settings.

At the end of August, the orchestra launched NY Phil Bandwagon, a series of socially-distanced outdoor performances.

The bandwagon itself is a bright red Ford truck. It holds a sound system, music stands, lights and an operations crew. The musicians follow it in another vehicle.

Fiona Simon plays the violin for the Philharmonic. She took part in a day of outdoor shows this month. She said the experience returned to her a sense of purpose, something she had not felt since indoor shows stopped in March.

"You're not a complete musician if you're just playing for yourself," Simon said.

She and a few other Philharmonic musicians played at three different street corners that day. The first show took place near a Bronx school. The second was held outside a public library in Queens. The final show took place in a Brooklyn greenspace.

As the group began its final performance of the day, singer Anthony Roth Costanzo opened the show, standing in the open back of the Bandwagon.

"We're going to play you a little concert," he said as people began to gather around in the warmth of an early autumn sunset.

As the audience grew, it became clear that the concert was as much an emotional release for the crowd as it was for the musicians. Violinist Curtis Stewart, a guest performer, expressed it this way: "We need a place to put our feelings, we need a place to feel safe," he said.

"You don't know what you've got until it's gone."

The Philharmonic is holding its final 2020 Bandwagon concert this weekend. It plans to restart the program next spring.

On the New York Philharmonic's website, President Borda expressed her hope for a return to full orchestra shows.

"We cannot wait to be reunited with you, our audience, and we look forward to sharing that magical moment when you hear the very first downbeat of a New York Philharmonic concert."

symphony orchestra – n. a large orchestra of musicians who play classical music together and are led by a conductor

revenue – n. money that is made by or paid to a business or an organization

guest – n. a person who is invited to appear or perform on a program, at an event, etc.