< North Korea Sends Mixed Signals on Talks with US
Update Required To play the media you will need to either update your browser to a recent version or update your Flash plugin.
By Dan Novak
22 June 2021

Kim Yo Jong is the powerful sister of the North Korean leader. She said in a statement that the U.S. has the "wrong" expectation about her brother's recent comments.

The U.S. is looking at the situation in a way "to seek comfort for itself," she told the state-run Korean Central News Agency. She added that the expectation for talks with North Korea will lead the U.S. into "greater disappointment."

Last week, Kim Jong Un said at a ruling party meeting that his country must be ready for both "dialogue and confrontation."

Jake Sullivan is the White House National Security Advisor. He told ABC News that Kim's comments were an "interesting signal" but that he wants a clearer message from North Korea. He also said the U.S. wanted to restart negotiations with North Korea about its nuclear program.

This week, Sung Kim, the U.S. diplomat for North Korea, met with South Korean and Japanese officials on the North Korean issue. He said he hopes North Korea will agree to meet "anytime, anywhere without preconditions."

Jenny Town is a Korean expert at the Stimson Center in Washington, D.C. She said Kim Yo Jong's statement does not fully eliminate the idea that diplomacy can restart. She noted that the statement "appears to suggest it's not likely for now."

North Korea has boycotted talks with the United States since 2019. Kim Jong Un and former U.S. President Donald Trump met in February of that year in Vietnam. North Korea offered to close a nuclear center in exchange for a lifting of sanctions. But Trump rejected the offer. 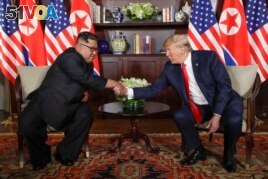 Since then, the coronavirus pandemic has made talks all but impossible. North Korea closed its border in January 2020. And it limited contact with the outside world including its main trading partner China.

Leif-Eric Easley is a professor at Ewha University in Seoul. He said the border closings "have caused much economic" hardship in the country.

At a meeting with senior officials last week, Kim Jong Un admitted that his country is facing a "tense" food situation. Easley said, "These meetings are largely political theater to cover up failures of economic planning and oppressive social control."

Several foreign media outlets reported that North Korea is facing growing food shortages and high price increases. However, it is difficult to confirm the information. Most foreigners, including aid workers and diplomats, have left the country during the pandemic.

North Korea says that it has no coronavirus cases in the country. The claim has been widely disputed by experts. And an outbreak would be very damaging to a poor country with a weak healthcare system and a lack of medical supplies.

William Gallo reported this story for Voice of America. Dan Novak adapted it for VOA Learning English. Hai Do was the editor.

comfort — v. to improve the quality of (something): to make (something) better

dialogue— n. a discussion or series of discussions that two groups or countries have in order to end a disagreement

confrontation — n. a situation in which people, groups, etc., fight, oppose, or challenge each other in an angry way

sanction — n. an action that is taken or an order that is given to force a country to obey international laws by limiting or stopping trade with that country, by not allowing economic aid for that country, etc.

outbreak — n. a sudden start or increase of fighting or disease