< North Carolina Plans to Raise Marriage Age to 16
Update Required To play the media you will need to either update your browser to a recent version or update your Flash plugin.
By Dan Friedell
23 August 2021

In North Carolina, children as young as 14 used to be able to get married if they were pregnant and had a judge's permission. As a result, the state was a known place to go if you were an adult who wanted to marry a child.

But North Carolina lawmakers recently passed a bill that changes the legal marriage age from 14 to 16. The law now goes to the state's Governor, Roy Cooper, for final approval. He is expected to sign it. 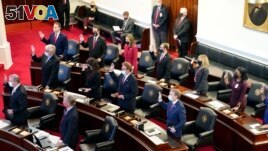 FILE - Members of the Senate are sworn in during the opening session of the North Carolina General Assembly in Raleigh, N.C., Wednesday, Jan. 13, 2021. (AP Photo/Gerry Broome)

The new law also limits the permissible age difference between a 16-year-old and their marriage partner to four years.

This year, state lawmakers listened to the stories of several former child brides. One of them, Judy Wiegand of Kentucky, appeared before a North Carolina House committee in June to support the reform.

"It is the responsibility of the government to protect all of the children," Wiegand told lawmakers. Wiegand was 13 when she and an older teenage boy — the father of her baby — married in the 1970s. She said that until she became an adult, the law left her largely unprotected against an abusive husband.

Jean Fields is 72 years old. She got married at the age of 15 to a man in his 20s. Fields had three children by the time she was 21. She later separated from her husband who, she said, had abused her psychologically for years.

Groups working to persuade lawmakers to change the marriage age in North Carolina say there are more women with similar stories. Those women, however, are uncomfortable talking in public about their experiences.

Two of those groups are Unchained at Last and the International Center for Research on Women. They are trying to get states around the U.S. to change the marriage age to 18, with no exceptions. So far, six states have that rule in place. New York was the most recent, where the rule became law in July.

A Center study shows an estimated 8,800 girls under the age of 18 were listed on marriage records in North Carolina between 2000 and 2015. The group said that 93 percent of the marriage applications it looked at involved a marriage between a child and an adult.

While many lawmakers wanted to change the marriage age to 18 in North Carolina, a spokeswoman for the Governor said raising the age to 16 is an important step toward ending child marriage in the state.

In one North Carolina county, two-thirds of all marriage permission requests involving people younger than 18 came from other states. People who live in nearby Tennessee, Kentucky, Georgia and South Carolina come to get married in North Carolina.

Drew Reisinger is the Register of Deeds in Buncombe County. He is an elected official who writes documents that permit people to get married.

He said a 49-year-old man from Kentucky recently came with a 17-year-old girl.

With the new law, he said, North Carolina will no longer be "at the very bottom of the barrel of states, but we're still going to be putting a lot of children in harm's way."

Gary D. Robertson wrote this story for the Associated Press. Dan Friedell adapted it for Learning English. Caty Weaver was the editor.

How old do people have to be to get married where you live? Tell us in the Comments Section and visit 51VOA.COM.

bride –n. a woman who has just married or is about to be married

psychological –adj. relating to the mind

county –n. an area of a state or country that is larger than a city and has its own government to deal with local matters