< New York's $200 French Fries Offer 'Escape' from Daily Life
Update Required To play the media you will need to either update your browser to a recent version or update your Flash plugin.
By Gregory Stachel
30 July 2021


The agency that watches inflation in the United States, the Federal Reserve, might have to reconsider the cost of food after visiting a restaurant in New York City.

The restaurant, Serendipity 3, serves the world's costliest french fries. The restaurant can be found in Manhattan's Upper East Side, a neighborhood known for its high living costs.

French fries are long, thin pieces of potato that are cooked in fat at a high temperature.

Serendipity 3 is well known in New York City. Many famous people, including Andy Warhol and Marilyn Monroe, have eaten there. Singer Cher even wrote something for the restaurant's cookbook. 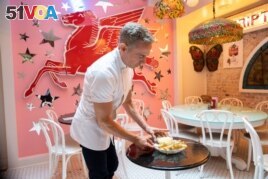 And on July 13, the Guinness World Records credited the restaurant with the costliest french fries in the world.

The creation is named "Crème de la Crème Pomme Frites." It begins with Chipperbec potatoes. The restaurant briefly cooks the vegetables in boiling vinegar, an acidic liquid, and champagne, a special alcohol. Then they are cooked two times in goose fat. The bird's fat makes the potatoes crispy on the outside and light and airy on the inside.

The fries are topped with gold that a person can eat. They are also topped with truffles – a rare and tasty fungus that is very costly.

Like many restaurants, Serendipity was closed during the COVID-19 health crisis. Calderone and Schoen-Kiewert thought the specialty fries would be a good way to announce the restaurant's return. It reopened on July 9.

The move is working. There is an eight- to 10-week wait list for the fries.

"It's been a rough year and a half for everyone, and we need to have some fun now," Calderone said.

Angela Moore reported this story for Reuters. Gregory Stachel adapted it for VOA Learning English. Ashley Thompson was the editor.

hamburger – n. a flat, usually round cake of finely chopped beef that is cooked and served usually in a roll or bun

potato – n. a round root of a plant that has brown, yellow, or red skin and white or yellow flesh and that is eaten as a vegetable

french fries - n. a long, thin piece of potato that is fried in deep fat

rough – adj. difficult or unpleasant to deal with

chef – n. a professional cook who usually is in charge of a kitchen in a restaurant