< New York Attack Has Asian Americans on Alert
Update Required To play the media you will need to either update your browser to a recent version or update your Flash plugin.
By Dan Friedell
01 April 2021


A 65-year-old woman who came to the United States from the Philippines was attacked while walking to church in New York City on Monday.

A man kicked her several times. Police arrested him on Wednesday on assault and hate crime charges.

The woman, identified as Vilma Kari, was taken to the hospital with broken bones. She was released a day later.

Nguyen Van is a 76-year-old woman who lives in the Bronx area of New York City. She told VOA that she is afraid to go out even though she does not know of any problems in her neighborhood.

"I'm afraid if they hit me, I'll fall," she said. "I don't get it why they would attack an Asian woman in the street, I feel so bad for her."

The New York attack came about two weeks after six Asian women were killed by Robert Aaron Long in the southern U.S. state of Georgia. The women all worked at spas near Atlanta.

AAPI stands for Asian American and Pacific Islanders. A group called Stop AAPI Hate said 3,800 anti-Asian incidents were reported in the last year. While the number seems large, the group said many incidents do not get reported.

Research from the Center for the Study of Hate and Extremism at California State University in San Bernardino shows hate crimes against Asians rose 150 percent last year while hate crimes overall dropped by seven percent. 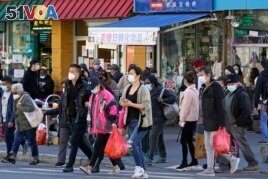 FILE - In this March 30, 2021, file photo, people cross a busy street in the shopping district of Flushing, a largely Asian American neighborhood in the Queens borough of New York. (AP Photo/Kathy Willens, File)

Measures to help the Asian community

Asian American groups around the U.S. are pushing officials to take these attacks seriously. But they are also taking measures to help protect people in their community.

In the recent attack against Vilma Kari, two people who worked in a nearby building did not help. They said they were worried about being hurt themselves.

Emily May runs a group called Hollaback!. She trains people on what to do when they see something bad happening. May said there were things they could have done, even if they were worried about harm coming to themselves, like shouting.

Stan Lee is a firefighter in San Francisco. He and other volunteers are patrolling with people – not only Asian people – around their neighborhoods to keep their neighbors safe.

"We see everyone in our community as our own," he said. "It doesn't have to be just Asians."

Teresa Ting is a 29-year-old New Yorker. She said she started the Main Street Patrol following an attack on another Asian-American woman in the Flushing neighborhood last February.

"It literally could have been my mother had it been the wrong place, wrong time," Ting said of that attack.

Ting wanted to do more than putting messages on social media. She organized volunteers who go out on weekend afternoons to help keep other Asian Americans safe. A number of crimes against Asian people do not get reported, she said, because the people who are harmed do not speak English well.

Duc Pham is a 22-year-old software engineer for Facebook. Pham said he received a letter from New York City's housing department addressed to him as "Chin Chong."

He told VOA, "It's one of the racist terms often used to mock Asian people perceived to be Chinese."

The city apologized as the incident became well known on social media. But Pham said he hopes New York City will do more to educate its city employees and start to change racially insensitive behavior.

Dan Friedell adapted this story for Learning English based on reports by VOA Vietnamese Service and The Associated Press. Hai Do was the editor.

Would you be concerned about visiting the U.S. from Asia right now? Tell us in the Comments Section and visit 51VOA.COM.

assault –n. the crime of trying or threatening to hurt someone physically

spa –n. a place where water that has many minerals in it comes up naturally from the ground and where people go to improve their health by swimming in, bathing in, or drinking the water

patrol –n. a group of people, vehicles, etc., that go through an area to make sure that it is safe

literally –adv. used to stress that a statement or description is true and accurate even though it may be surprising

perceive –v. to think of (someone or something) as being something stated

insensitive –adj. showing that you do not know or care about the feelings of other people