< New Studies on Omicron: Variant Multiplies at Slower Rate in Lungs
Update Required To play the media you will need to either update your browser to a recent version or update your Flash plugin.
By John Russell
20 December 2021


The Reuters news agency recently examined a group of new studies on COVID-19. These studies, for the most part, have yet to be closely examined by outside experts. They include information that needs further study to support their findings.

Researchers said last week that differences in how well Omicron and other variants of the coronavirus multiply may help predict Omicron's effects. 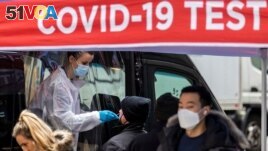 A man is tested for the coronavirus disease (COVID-19) at a mobile COVID-19 testing unit, as pedestrians make their way in the sidewalk during the spread of the Omicron coronavirus variant in Manhattan, New York, U.S., December 8, 2021. (REUTERS/Eduardo Munoz/File Photo)

Compared to the earlier Delta variant, Omicron multiplies itself 70 times more quickly in tissues that line airway passages. This may speed up person-to-person spread, the researchers said. But in lung tissues, Omicron multiplies 10 times more slowly than the original kind of the coronavirus. This difference might lead to less-severe illness.

An official report of these findings is under careful study by a group of experts before publication and has not been released by the research team. In a news release issued by Hong Kong University, study leader Dr. Michael Chan Chi-wai said, "It is important to note that the severity of disease in humans is not determined only by virus replication" but also by each person's immune response to the infection. Such a response sometimes turns into life-threatening inflammation.

Chan added, "By infecting many more people, a very infectious virus may cause more severe disease and death even though the virus itself may be less pathogenic."

Pathogenic is a term that describes something such as a type of bacteria or a virus that causes disease.

Chan explained further, "taken together with our recent studies showing that the Omicron variant can partially escape immunity from vaccines and past infection, the overall threat from Omicron variant is likely to be very significant."

Another group of researchers said a model of how the Omicron variant attaches to cells and antibodies gives information about its behavior and will help in designing treatments.

Using computer models of the spike protein on Omicron's surface, they examined changes occurring when the spike grabs onto a cell-surface protein called ACE2, the virus' way into the cell.

The research team also modeled the spike with different classes of antibodies trying to attack it. The antibodies attack from different places, "like a football team's defense might tackle a ball carrier," said Joseph Lubin of Rutgers University in New Jersey.

The findings, posted last week on the website bioRxiv ahead of examination by outside experts, need to be checked, "particularly with real-world samples from people," Lubin said. He added "while our molecular structure predictions are by no means a final word on Omicron, (we hope) they enable a faster and more effective response from the global community."

A third study, put online last week in the publication JAMA Network Open, showed that infected people who show no symptoms might be helping to spread SARS-CoV-2, the virus that causes COVID-19. Such cases, known as asymptomatic cases, could make up to 40.5 percent of confirmed infections worldwide.

The grouped percentage of asymptomatic infections was about 46 percent in North America, 44 percent in Europe and 28 percent in Asia.

The researchers added that officials should check for asymptomatic infections, and those who are identified "should be under management similar to that for confirmed infections, including isolating and contact tracing."

Nancy Lapid reported on this story for Reuters. John Russell adapted it for Learning English. Susan Shand was the editor.

multiply – v. to increase greatly in number or amount : to become much more numerous

replication –- n. to repeat or copy (something) exactly

inflammation -- n. a response to cellular injury that serves as a mechanism to eliminate harmful agents and damaged tissue

model -- n. A system of data presented as a mathematical description of something

tackle -- v. to try to get the ball from (an opposing player who has it); American football or rugby : to force (the player with the ball) to fall to the ground