< New Show Comes at Important Time for Asian Americans
Update Required To play the media you will need to either update your browser to a recent version or update your Flash plugin.
By Anna Matteo
09 April 2021


New actors just starting off will sometimes claim to have many different skills to be considered for roles in films. The thinking is simple: an actor with more skills should have more offers.

But one Chinese American actor set a clear limit early in her career. Olivia Liang made a promise to herself. She would "never learn martial arts" until someone paid her to do it.

"When I started off in the industry, people would asak me why martial arts was not (wasn't) on my resume," said Liang.

She explains that many people expect Asian actors to have martial arts skills. However, having that ability could typecast an actor. Typecast means always to cast, or assign, a certain kind of actor the same kind of role.

Liang kept her promise. She has learned martial arts as she takes the starring role in The CW Network's new series "Kung Fu." And she got paid to do it. 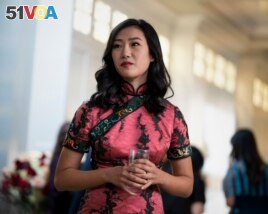 "Kung Fu" comes from the 1972 series starring David Carradine. It stars Liang as Nicky Shen. While visiting China she joins the Shaolin Temple where she learns Shaolin values and martial arts.

After her teacher is killed, she returns home to find her community unsettled by a local gang. She must use the martial arts skills she learned to protect her neighborhood and family. Soon she discovers that she is being targeted by the same killer responsible for her teacher's death.

The CW network is based in the United States and is known for superhero shows. However, Liang says "Kung Fu" is different.

"Nicky is heroic, but she doesn't see herself as a hero," explained Liang. "She sees bad things happening and feels like she needs to do something about it."

"I'm so excited that I get to give some people this opportunity to shine," said Kim.

When Kim watched the first camera test for the show, she remembered thinking: "I've never seen the screen filled with Asian American faces like this is."

Kim says the show has five writers of Asian ancestry. Half of the writers are also women. Kim says this is usually not the case. "Usually, it's just me and one other woman in a room."

Playing Nicky's father, Jin, is actor Tzi Ma. He says it is wonderful to have so many people with Asian ties working on the show. The people making creative decisions on the show, he says, actually know the Asian experience.

"Not only is there representation on screen, but we back it up from our writer's room to all our guest directors," said Ma. He added that it is something he has never seen in his long career as an actor.

Ma hopes the authenticity of the series will help to change the public view of Asians. Currently hate crimes against Asian Americans are on the rise.

The Asian American community is also paying attention -- not only to see their stories on television but to see how they are told.

Valerie Soe is a professor in the Asian American Studies Department at San Francisco State University. She hopes the show's producers and writers will be careful with what imagery is presented to viewers.

She thinks the gang storyline could be problematic. It could increase the stereotypes "that all Asian men are gangsters" or criminals.

However, Soe says the series is generally a win for her because it gives one more example of an Asian American story. She uses a common expression to describe her feelings: The more the merrier. This means that the more people involved in something, the more fun, or merrier, it will be.

Soe says, "I think not everything's ... going to be exactly what we want. But, if you have a lot of different choices, then you don't expect everything from one."

Alicia Rancilio wrote this story for the Associated Press. Anna Matteo adapted it for VOA Learning English. Hai Do was the editor.

role -n. the character played by an actor

martial arts -n. any one of several forms of fighting and self-defense (such as karate and judo) that are widely practiced as sports

resume -n. a short document describing your education, work history, etc., that you give an employer when you are applying for a job

gang -n. a group of criminals

opportunity -n. an amount of time or a situation in which something can be done

guest -n. person who is invited to a place or an event as a special honor

authenticity -n. the state of being true and accurate

stereotype -n. to believe unfairly that all people or things with a particular characteristic are the same

the more the merrier phase : used to say that more people are welcome or invited to do something