< Nature's Healing Power on Appalachian Trail
Update Required To play the media you will need to either update your browser to a recent version or update your Flash plugin.
By Anna Matteo
21 June 2021

On a recent sunny day, hikers stood at an entry point on the Appalachian Trail near Hawk Mountain in the U.S. state of Pennsylvania. Some rested and drank water as they prepared to continue hiking on the 3,508-kilometer walking path. The Appalachian Trail stretches from Maine in the north to Georgia in the south. 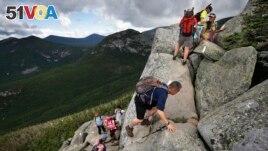 In this Saturday, Aug. 7, 2015 photo, day-hikers scramble over rocky boulders on the Appalachian Trail below the summit of Mt. Katahdin in Baxter State Park in Maine. (AP Photo/Robert F. Bukaty)

One of the hikers is Mario Kovach, a war veteran. On his right arm are the last names of many soldiers permanently written, or tattooed -- Solesbee, Bell, Schwartz, Seidler, Miller, Moss -- just to name a few.

They were all members of the U.S. Air Force Explosive Ordnance Disposal unit. And they all died in battle. They had the dangerous job of defusing bombs. That was also Kovach's job for 20 years in the Air Force. Kovach retired in 2018. He served five tours of duty in Afghanistan without serious injury to his body. However, his mental health suffered.

So, he has been treating his mental health on the trail and in other places in nature. He shared his experiences of healing on the trails with a reporter from the Associated Press.

"Nature is nothing that man controls," Kovach said. He added that it is both the natural environment and the peace and quiet that has helped him heal.

Cindy Ross is a writer and lifelong hiker. Her latest book is Walking Toward Peace — Veterans Healing on America's Trails. It is about the veterans Ross serves through the nonprofit organization called River House PA. Her experience with some veterans who thru-hiked the trail in 2013 led her to start the organization. "Thru-hiked" means they walked the whole 3,508 kilometers.

Ross describes the organization and its surrounding natural environment as places where veterans and others suffering from post-traumatic stress disorder, or PTSD, can heal.

PTSD is a condition affecting soldiers who have experienced extreme conditions in war. But it develops in anyone who has experienced a shocking, scary or dangerous event.

PTSD involves reliving the trauma over and over. It includes physical responses like a fast heartbeat. People suffering from PTSD may have bad dreams and frightening thoughts. They can also be easily surprised, feel tense, have trouble sleeping and have angry outbursts

One study suggests that as many as 30 percent of veterans of the wars in Iraq and Afghanistan suffer from PTSD. Many Vietnam veterans are still affected.

Veterans also take their own lives in greater numbers than the general population. Suicides in the military have been called an epidemic. The Department of Veterans Affairs says in 2018, nearly 18 veterans committed suicide every day.

The number of those who have killed themselves has gone down among veterans who have received care through the department. However, experts say much work remains to be done.

Kovach is among the veterans Ross wrote about in her book. The men and women had extreme experiences. In many cases, they were close to suicide before discovering the healing power of nature.

Ross worked with the veterans agency and word spread about the program. Besides hiking the trails, activities include different types of boating.

Paralyzed veterans can ride specialized mountain bikes on the trails. And at the end of the day's activities, they all meet to have dinner together around a fire.

"At least a few of them would start to cry and say, ‘It was the best day of my life,'" Ross said. They also say to Ross that they need to do this with their family and children. The veterans often tell her a day in nature was what saved their lives.

Last fall, Kovach helped start "Project Felix" . It is a nonprofit group for soldiers who are dealing with survivor's guilt and other conditions. He said the goal is to reduce military suicides.

He said there are other ways to heal. But, a day in the woods — or a week, or a month — is among the best.

"It doesn't cost anything," he said. "You're not putting medications into you. And you can do it anytime."

hiker –n. a person who walks a long distance for pleasure and exercise

stress –n. to cause or experience physical or emotional tension

defuse –v. to remove part of an explosive device so that it is no longer harmful

traumatic –adj. causing someone to become very upset in a way that can lead to serious mental and emotional problems : trauma –n. a disordered psychic or behavioral state resulting from severe mental or emotional stress or physical injury

tense –adj. nervous and not able to relax

epidemic –n. the sudden quick spread of something harmful or unwanted

paralyzed –adj. unable to move part of the body such as arms or legs