< NATO to Set Up New Space Center Amid Russia Concerns
Update Required To play the media you will need to either update your browser to a recent version or update your Flash plugin.
By Susan Shand
21 October 2020


The Belgian village of Kester is home to a group of top-secret, fenced-off buildings on a hill some call "the radar station." Some people have claimed to have seen mysterious Russians near the buildings. Others have suggested that the area might have been used as a base for U.S. nuclear warheads.

It's easy to see why the buildings would be of interest. Four large, white, Kevlar domes sit like shining spacecraft in the middle of farmland, about 25 kilometers west of Brussels. 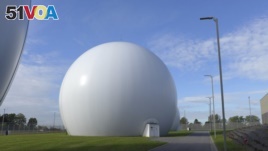 The buildings make up the Kester Satellite Ground Station, an important center that supports NATO's space communications network. It is the biggest and most modern of four stations the military alliance runs.

Satellites are important to NATO. More than half of the 2,000 satellites orbiting Earth are operated by NATO countries. The satellites make sure everything is connected, from mobile phone and banking services to weather forecasts. NATO commanders in places like Afghanistan or Kosovo use some of them to navigate, communicate, share intelligence and identify missile launches.

This week, the Kester Satellite Ground Station will be part of a new defense organization. NATO is set to announce it is creating a space center to operate its satellite communications. It will also assist in important military operations around the world.

In December, NATO leaders declared that space was the alliance's "fifth domain" of operations, after land, sea, air and cyberspace.

Starting Thursday, NATO defense ministers will begin two days of discussions. During the talks, the ministers are expected to approve plans for the new space center, to be based at NATO's Air Command in Ramstein, Germany.

It will be the center for space support for NATO operations, "sharing information and coordinating our activities," NATO Secretary-General Jens Stoltenberg said.

It is part of NATO's efforts to keep ahead in the fast-moving world of technology. NATO is worried about what it sees as increasingly aggressive behavior in space by China and Russia.

Around 80 countries have satellites and private companies are adding to that number. In the 1980s, only a small part of NATO's communication network used satellites. Today, it is at least 40 percent. During the Cold War, NATO had more than 20 stations. But new technologies now permit the world's largest security alliance to double its coverage with only about four stations.

At Kester, four satellite dishes beneath Kevlar domes connect NATO's civilian and military headquarters in Belgium to other operations around the world.

The dishes send information and images from across Europe and Africa into space above the equator where satellites owned by allies like the United States, Britain, France and Italy orbit. NATO itself does not own any satellites.

Around the world, commanders in ships, aircraft and buildings decrypt the information to get orders, pictures and intelligence, prepare missions, or move troops and military equipment. From Kester, new lines of communication can be set up for NATO within 30 minutes.

The buildings have special security systems and were built to resist terrorist attacks. But NATO allies are worried about other kinds of attacks involving anti-satellite weapons high above the Earth.

"Some nations – including Russia and China – are developing anti-satellite systems which could blind, disable or shoot down satellites and create dangerous debris in orbit," Stoltenberg said.

NATO says its actions "will remain defensive and fully in line with international law." And Stoltenberg has repeatedly said over the past year that NATO has no plans to put weapons in space.

The Associated Press reported this story. Susan Shand adapted it for Learning English. It was edited by Bryan Lynn.

navigate – v. to determine the correct sea or land route

coordinate – v. to put the details together

dish – n. the rounded exterior of a satellite

equator – n. an imaginary line drawn around the earth equally distant from both poles, the parallel of latitude

debris – n. the leftover garbage after a catastrophe