< NATO Sends Ships, Planes to Eastern Europe over Russian Buildup Near Ukraine
Update Required To play the media you will need to either update your browser to a recent version or update your Flash plugin.
By Bryan Lynn
24 January 2022

The military alliance said Monday that additional troops and equipment would be provided by several nations, including the United States, Denmark, Spain, France and the Netherlands.

In a statement, NATO Secretary General Jens Stoltenberg welcomed the deployments. He said the alliance planned to "continue to take all necessary measures to protect and defend all allies, including by reinforcing the eastern part of the alliance." 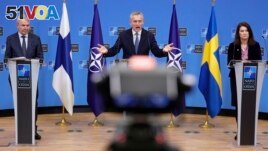 Stoltenberg added: "We will always respond to any deterioration of our security environment, including through strengthening our collective defense."

Russia has deployed an estimated 100,000 troops just across its border with Ukraine. U.S. and NATO officials have expressed concern that the military buildup could lead to a Russian invasion.

Russia denies it is planning to invade Ukraine. Russian officials have said the country's military buildup serves as a defensive measure against possible military actions by NATO and Ukraine.

Russia is demanding that NATO promise it will never permit Ukraine to join the military alliance. It has also sought guarantees against further NATO expansion in Eastern Europe.

NATO said Monday it was strengthening its "deterrence" abilities in the Baltic Sea area. Denmark planned to send a warship and F-16 fighter planes to Lithuania. Spain was sending four fighter jets to Bulgaria and three ships to the Black Sea to join NATO naval forces. France said it was prepared to send troops to Romania.

Some NATO countries close to Russia – Estonia, Latvia and Lithuania – have confirmed plans to send U.S.-made anti-tank and anti-aircraft missiles to Ukraine.

The United States and Britain announced orders for their embassy workers and family members in Kyiv to leave Ukraine. They said the orders were issued because of the threat of possible Russian military action.

NATO's announcement came as European Union foreign ministers sought to show a united front in support of Ukraine. In a statement, the ministers said the EU was already working to prepare possible sanctions against Russia. They warned that "any further military aggression by Russia against Ukraine will have massive consequences and severe costs."

Separately, the EU also promised to increase financial support for Ukraine. It said it plans to approve $1.4 billion in loans and grants to the country as soon as possible.

The Associated Press, Reuters and VOA News reported on this story. Bryan Lynn adapted the reports for VOA Learning English.

respond – v. say or do something as an answer or reaction to something

deter – v. make someone less likely to do something

sanction – n. an order that is given to force a country to obey international laws by limiting or stopping trade with that country

consequence – n. the result of an action or situation, especially one that has a bad result

grant – n. an amount of money provided by a government or organization for a special purpose