< Nations Concerned About New COVID-19 Version 'Omicron' from Africa
Update Required To play the media you will need to either update your browser to a recent version or update your Flash plugin.
By Dan Friedell
26 November 2021


A new variant of COVID-19 found in Africa has international health organizations and national leaders again concerned about virus restrictions.

A group of World Health Organization experts has called the variant "omicron," a letter in the Greek alphabet like "delta."

Belgium and Israel said travelers who came from Africa recently tested positive for the variant. 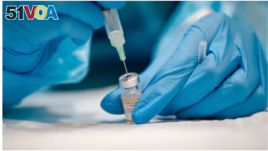 A group of World Health Organization experts has called the COVID-19 variant from Africa "omicron," a letter in the Greek alphabet like "delta."

It is not clear whether the new version of the virus causes more severe health problems. But nations are trying to prevent its spread.

The health minister in Belgium called the variant "suspicious." Frank Vandenbroucke said: "We don't know if it's a very dangerous variant."

In The Netherlands, an airplane with passengers from Cape Town, South Africa was held on the runway for four hours for extra testing.

One passenger called the situation "ridiculous."

Jens Spahn is the German Health Minister. He said problems from a new variant are "the last thing we need."

President of the European Commission Ursula von der Leyen said Europe needs to be careful until more is known about the variant. She asked travelers from southern Africa to "respect strict quarantine rules." She asked for care to make sure the variant does not spread around the world.

The traveler who tested positive in Belgium spent over one week in the country before getting a test because of mild signs of infection. In Israel, a traveler and two other people were quarantined. All the individuals had been vaccinated.

Health experts say the spread of the variant in Africa shows the problem with unequal availability of vaccines. Fewer than six percent of people in Africa have been fully vaccinated against COVID-19.

Michael Head is a global health researcher at the University of Southampton in Great Britain. He said the new variant coming in Africa results from wealthier nations buying more vaccine than they need. He said large countries should do more to send vaccines to smaller countries.

Investors around the world showed their concern about the new variant. Measures of stock prices dropped on Friday in Asia, Europe and the U.S.

Dr. Michael Ryan is the head of emergencies at the World Health Organization. He warned against "knee-jerk responses" to the variant. A knee-jerk reaction is one that is done without thought or reason.

However, Britain banned travel from southern Africa on Friday.

Dan Friedell adapted this story for Learning English based on a report by the Associated Press. Mario Ritter, Jr. was the editor.

What do you think about the reaction to the new variant from Africa? Tell us in the Comments Section and visit 51VOA.COM.

test positive – adj. to have a test show the presence of a disease, virus or infection

suspicious – adj. causing a feeling that something is wrong or that someone is behaving wrongly : causing suspicion

strict – adj. describing a rule that must be obeyed or followed

quarantine – n. the period of time during which a person or animal that has a disease or that might have a disease is kept away from others to prevent the disease from spreading