< NASA: Spacecraft ‘Touches’ Sun
Update Required To play the media you will need to either update your browser to a recent version or update your Flash plugin.
By Bryan Lynn
18 December 2021


The American space agency NASA says a spacecraft has entered the sun's outermost atmosphere for the first time.

The Parker Solar Probe traveled through the solar atmosphere's outer edge – known as the corona – in April, scientists announced this week. They said it took them a few months to examine data from the spacecraft and to confirm the result. 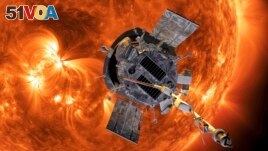 This image made available by NASA shows an artist's rendering of the Parker Solar Probe approaching the Sun. (Steve Gribben/Johns Hopkins APL/NASA via AP)

Unlike Earth, the sun does not have a solid surface. Instead, it is a superheated ball of material held together by gravity and magnetic forces.

Some solar material escapes and is released into space in what is known as the solar wind. The solar wind is the flow of charged particles, known as plasma, released from the corona into space.

The Parker Solar Probe was launched in 2018 with a main goal of studying the solar wind. Scientists say being able to study the solar wind and the corona close up can help them better understand how solar activity influences Earth.

NASA has described the spacecraft's entry into the outermost atmosphere as successfully "touching" the sun.

Nour Raouafi is the project scientist on the mission. He is with the Johns Hopkins Applied Physics Laboratory in Maryland. Raouafi called the finding "fascinatingly exciting."

The spacecraft is now able to sense conditions in the magnetically-influenced corona for the very first time, Raouafi said.

He added that the evidence used to confirm the findings included data on magnetic fields and the solar wind, as well as images. "We can actually see the spacecraft flying through coronal structures that can be observed during a total solar eclipse," Raouafi said.

Scientists announced the findings during a meeting of the American Geophysical Union. Results were also published by the American Physical Society.

The scientists reported Parker was about 13 million kilometers from the center of the sun when it crossed the boundary between the solar atmosphere and the solar wind. They said the spacecraft was able to go in and out of the corona at least three times.

The Parker team said early data also suggested the spacecraft may have entered the corona during its ninth close pass in August. But further study is needed to make a confirmation. The scientists said Parker made its 10th close pass last month.

The spacecraft is expected to keep getting closer to the sun and diving deeper into the corona until its final orbit, planned for 2025.

The Associated Press and NASA reported on this story. Bryan Lynn adapted the reports for VOA Learning English. Mario Ritter, Jr. was the editor.