< NASA’s Perseverance Rover Collects First Martian Rock
Update Required To play the media you will need to either update your browser to a recent version or update your Flash plugin.
By Bryan Lynn
08 September 2021

The rover, called Perseverance, used a drill attached to its robotic arm to remove a small, circular sample -- also called a core -- from a larger rock on the surface of Mars.

NASA confirmed the successful collection in a statement on Monday. The agency also released pictures of the sample, which it said appears to be about as thick as a writing instrument.

After the drilling was completed, Perseverance took additional pictures of the sample as well as the tube it was kept in. The images are useful to scientists back on Earth who study the sample. 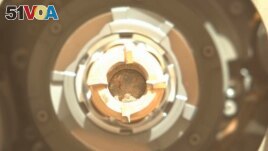 This Wednesday, Sept. 1, 2021 photo made available by NASA shows the first rock sample for return to Earth, obtained by the Mars Perseverance rover. (NASA/JPL-Caltech/ASU via AP)

In the final step, Perseverance moved the tube to a storage area inside the rover and hermetically sealed the container. Hermetic sealing is a process that completely closes off the container so that no air can flow in or out.

The Perseverance team shared the news on Twitter. "It's official: I've now captured, sealed, and stored the first core sample ever drilled on another planet, in a quest to return samples to Earth." The tweet added that the sample was "the first in a one-of-a-kind Martian rock collection."

It was the second collection attempt for Perseverance. The first one happened about a month ago. In that try, NASA confirmed that the rover had successfully drilled into another rock at a different site on the Mars surface.

But during the collection attempt, images showed that the sample tube was empty. NASA engineers later reported that the rock the rover drilled into must not have been strong enough to produce a core sample. So, the drilling operation only produced dust that could not be collected.

The latest core sample -- and all others collected from now on – will be stored on Mars until they can be picked up during future missions to the Red Planet and brought to Earth. NASA says its Mars Sample Return mission -- to be carried out jointly with the European Space Agency -- could have the rock samples back to Earth sometime in the 2030s.

Perseverance landed in February at Jezero Crater, an area scientists believe to be the remains of an ancient river system. The high-tech rover is on a mission to search for signs of ancient microbial life on Mars.

Perseverance has been assisted in some efforts by a small experimental helicopter called Ingenuity. The helicopter made history in April by becoming the first aircraft to perform a powered, controlled flight on another planet. So far, Ingenuity has performed above expectations, completing 11 flight tests and helping to identify areas for Perseverance to explore.

Ken Farley is a project scientist on the Perseverance team. He said the latest collection effort marks the beginning of many more to come for the rover, which has 43 sample tubes to fill.

"There is a lot of Jezero Crater left to explore, and we will continue our journey in the months and years ahead," Farley said in a statement. "When we get these samples back to Earth, they are going to tell us a great deal about some of the earliest chapters in the evolution of Mars," he added.

Bryan Lynn wrote this story for VOA Learning English, based on reports from NASA, The Associated Press and Agence France-Presse. Caty Weaver was the editor.

drill – n. a tool or machine used for making holes in a hard substance

quest – n. an attempt to get something of do something difficult

journey – n. the act of traveling from one place to another

chapter – n. a period of time when something happens

evolution – n. the way in which things gradually develop and change over millions of years