< NASA Prepares for First Helicopter Flight Test on Mars
Update Required To play the media you will need to either update your browser to a recent version or update your Flash plugin.
By Bryan Lynn
11 April 2021


The U.S. space agency's explorer, Perseverance, arrived on Mars on February 18 with an important piece of equipment.

NASA's Perseverance was carrying an experimental aircraft called Ingenuity, which is set to have its first test flight this week. NASA hopes to make the helicopter the first vehicle to fly on a planet other than Earth.

NASA recently announced that Ingenuity had been safely lowered onto the surface of Mars from its storage space underneath Perseverance. The explorer, or rover, then moved about five meters away from Ingenuity. The rover and aircraft are communicating through radios.

After separating from the rover, the helicopter faced its first important test on Mars -- protecting itself from the planet's freezing temperatures. Readings taken from instruments on Perseverance from early April showed low temperatures at the landing area, called Jezero Crater, had reached minus 83 degrees Celsius. 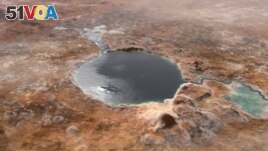 This illustration shows Jezero Crater — the landing site of the Mars 2020 Perseverance rover — as it may have looked billions of years go on Mars, when it was a lake. An inlet and outlet are also visible on either side of the lake. (Image Credit: NASA/JPL)

In a statement, NASA said Ingenuity passed the test by surviving its first night alone in the extreme cold. The helicopter used its own solar-powered battery to operate a heater to protect its electrical equipment from damage.

The space agency praised the success as "a major milestone" for the experimental aircraft.

MiMi Aung is Ingenuity's project leader at NASA's Jet Propulsion Laboratory. She said that while her team did all it could to prepare the helicopter, the group was very excited to see the results of their work on Mars.

"We now have confirmation that we have the right insulation, the right heaters, and enough energy in its battery to survive the cold night, which is a big win for the team," Aung said. "We're excited to continue to prepare Ingenuity for its first flight test."

The next set of tests involves the aircraft's motors and rotor equipment. The helicopter will be the first aircraft to attempt powered, controlled flight on another planet.

The main purpose of the Perseverance rover is to search for signs of microbial life from the planet's ancient past. The explorer is expected to collect rock and soil materials from the surface. They will be sent to Earth by a future mission to Mars.

During its first test, Ingenuity will attempt to rise about three meters off the surface. It will try to briefly push forward into the planet's extremely thin atmosphere. Then, the aircraft will attempt to turn around and complete a soft landing.

If the first flight is successful, other tests will be carried out, with Ingenuity trying to go a little higher and farther each time. NASA says such helicopters could assist astronauts on future search and collection missions.

NASA recently released pictures of Perseverance and Ingenuity. The space agency described one of the pictures as a "selfie." It showed the rover and helicopter sitting on the rocky surface of Mars.

The rover was able to capture the selfie with its robotic arm, which has a camera attached to the end. NASA said the picture was made from 62 individual images that were put together once they were sent back to Earth.

Bryan Lynn wrote this story for Learning English, based on reports from NASA, Reuters and Agence France-Presse. Mario Ritter, Jr. was the editor.

battery – n. a device that is placed inside a machine to supply it with electricity

milestone – n. an important point in the progress or development of something

insulation – n. a material used to stop heat, cold, sound or electricity from escaping or entering

rotor – n. a part of a machine that spins, especially the device supporting the turning blades of a helicopter

mission – n. the flight of a spacecraft to perform a task or job