< NASA Expands Mars Helicopter Mission After Successful Test Flights
Update Required To play the media you will need to either update your browser to a recent version or update your Flash plugin.
By Bryan Lynn
09 May 2021

The helicopter, named Ingenuity, made history last month by becoming the first aircraft to perform a powered, controlled flight on another planet.

Mission controllers say the helicopter has performed above expectations in all four of its test flights so far. While many test flights were carried out on Earth, Ingenuity was launched to demonstrate that a small helicopter could actually fly on Mars.

During its fourth flight on April 30, NASA said Ingenuity reached a height of about 5 meters and beat the aircraft's speed and distance records from earlier flights.

Now that the mission has successfully met its first goals, NASA says it expanded the project to an "operational demonstration." This new part of the mission is expected to test Ingenuity's ability to explore different parts of the planet from the air.

In its past flights, Ingenuity has been taking off and landing near NASA's Perseverance explorer, or rover. The rover is on its own mission to search for signs of ancient microbial life on Mars. It was carrying Ingenuity when it landed at the planet's Jezero Crater in February.

NASA's first stated goals with Ingenuity were to complete a series of flights to see how high and how far the aircraft could progress in each test. The demonstration flights were expected to end in early May. 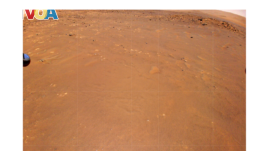 NASA's Ingenuity Mars Helicopter took this color image during its fourth flight, on April 30, 2021. "Airfield B," its new landing site, can be seen below. The helicopter will seek to set down there on its fifth flight attempt. (NASA/JPL-Caltech)

In the new tests, controllers at NASA's Jet Propulsion Laboratory (JPL) in California aim to have Ingenuity travel farther and operate more independently from Perseverance.

Project manager MiMi Aung said in its fifth flight, which currently has no set date, Ingenuity will move to a new "airfield" as engineers attempt to press the helicopter beyond its design limits. The new tests should give NASA a more detailed picture of how Ingenuity's equipment operates in different conditions. The flights could also be the basis for designing future aircraft to perform search and collection missions on Mars or other planets.

Ingenuity is also expected to carry out activities to support Perseverance's ongoing mission. NASA says the helicopter can fly over nearby areas to observe science targets or help map out travel paths for the rover. Ingenuity can also capture images to be used for future Mars mapping operations.

Such flights by Ingenuity, while not planned in the beginning, are now "a bonus and not a requirement for Perseverance to complete its science mission," a NASA statement said.

The space agency plans at least three operational test flights in May and the helicopter mission could go even longer if all goes well. "Ingenuity loves Mars," Aung recently told reporters about the helicopter's mission. "It takes off and I almost feel the freedom that it feels," she said.

NASA officials say that even though Ingenuity was designed to operate on Mars for 30 days, it can probably survive the freezing Martian nights for at least another few months.

The helicopter also has to work harder on Mars, where the atmosphere is much thinner. Engineers have said Ingenuity's blades have to spin five times faster than on Earth to successfully fly.

"We really do expect some finite life," Aung said, adding, "so it will be a race between how long these parts surprise us in surviving."

Bryan Lynn wrote this story for VOA Learning English, based on reports from The Associated Press, Reuters and NASA. Hai Do was the editor.

bonus – n. an extra thing added to something you were expecting

blade – n. an arm of a propeller that spins to lift an aircraft off the ground

finite – adj. having a limit or end