< NASA Collects Oxygen From the Atmosphere of Mars
Update Required To play the media you will need to either update your browser to a recent version or update your Flash plugin.
By John Russell
23 April 2021


The American space agency NASA has collected oxygen from the atmosphere of another planet for the first time.

A device on NASA's Mars explorer Perseverance was able to extract oxygen from carbon dioxide on the Red Planet. 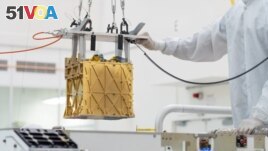 It was the second major event during the Perseverance mission to Mars. NASA announced the experiment on Wednesday.

The experimental device is called MOXIE, short for Mars Oxygen In-Situ Resource Utilization Experiment. It produced about five grams of oxygen. That amount would permit an astronaut to breathe for about 10 minutes, NASA said.

Although the amount of oxygen was small, it marked the first experimental extraction of a natural resource from the environment of another planet.

Trudy Kortes is director of technology demonstrations within NASA's Space Technology Mission Directorate. In a statement, she called MOXIE the first technology of its kind to help future missions "live off the land" of another planet.

The instrument works through electrolysis: a process which uses extreme heat to separate oxygen atoms from molecules of carbon dioxide.

Carbon dioxide makes up about 95 percent of the Martian atmosphere. The rest is mainly molecular nitrogen and argon.

Oxygen exists on Mars in very small amounts. But a large supply of it is important for human exploration there. It is necessary for astronauts to breathe and for rocket fuel.

MOXIE lead investigator Michael Hecht said in NASA's news release that transporting a one-ton oxygen-conversion machine to Mars is easier than trying to take tons of oxygen from Earth. Large amounts of oxygen are needed to launch rockets into space from Mars.

Astronauts living and working on Mars would require possibly one metric ton of oxygen to last one year, Hecht added.

MOXIE is designed to produce up to 10 grams of oxygen in an hour. Scientists plan to run the machine at least nine other times over the next two years under different conditions.

The first oxygen extraction came one day after NASA carried out the first controlled, powered flight of an aircraft on another planet. The very small robot helicopter was able to launch from and land on the surface of Mars.

Like MOXIE, the helicopter, named Ingenuity, rode to Mars with Perseverance. The spacecraft has six wheels so it can move across the planet's surface.

Perseverance's main mission is to search for signs of ancient microbes that may have lived on Mars billions of years ago.

Steve Gorman reported on this story for Reuters. John Russell adapted it for Learning English. Mario Ritter, Jr. was the editor. _____

mission – n. a flight by an aircraft or spacecraft to perform a specific task

extract – v. to get something by pulling it out, forcing it out, etc. : the act of extracting something

microbe – n. an extremely small living thing that can only be seen with a microscope; micro-organisms