< Mystery Grows with Suspects Arrested in Haiti President Killing
Update Required To play the media you will need to either update your browser to a recent version or update your Flash plugin.
By Jill Robbins
13 July 2021


A medical doctor. A religious leader. A failed Florida businessman. These are some of the details about the main suspect in the killing of Haitian president Jovenel Moise.

Local officials identified the suspect as Christian Emmanuel Sanon, a 62-year-old Haitian. He once expressed a desire to lead his country in a YouTube video. However, he is unknown among Haitian political groups. And friends suggested that those really behind the killing had tricked him.

A friend of Sanon in the American state of Florida told The Associated Press the suspect is a religious leader and also a medical doctor in Haiti, but not in the U.S. The friend's name is not made public for reasons of safety. He reported that Sanon told him people claiming to represent the U.S. State and Justice departments said they wanted to make him president.

He said the plan was only to arrest Moise, and Sanon would not have participated if he knew Moise would be killed.

"I guarantee you that," the friend said. "This was supposed to be a mission to save Haiti from hell, with support from the U.S. government."

Rev. Larry Caldwell, another religious leader and friend of Sanon in Florida, agreed. Caldwell said he worked with Sanon setting up religious centers and medical offices in Haiti between 2000 and 2010. He does not believe Sanon would have been involved in violence.

"I know the character of the man," Caldwell said. 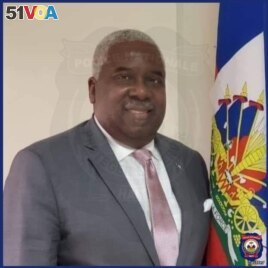 Christian Emmanuel Sanon, a 62-year-old Haitian suspect arrested in the investigation of the killing of President Jovenel Moise

However, records show Sanon has never been approved to practice medicine or any other profession covered by Florida's Department of Health. They also show that Sanon started several businesses over the last 20 years, all of which failed.

Among the suspects arrested for Moise's killing are 23 former Colombian soldiers, along with three Haitians. Officials said five suspects are still free and at least three have been killed.

Colombia's national police chief, General Jorge Luis Vargas, said that a Florida-based company, CTU Security, bought 19 plane tickets from Bogota to Santo Domingo for the Colombian suspects. Most arrived in the Dominican Republic in June and moved into Haiti within weeks, Vargas said.

Haiti's National Police chief, Léon Charles, said that Sanon was in contact with CTU Security and that the company employed the suspects in the killing. Officers also found a hat with the logo of the U.S. Drug Enforcement Administration, 20 boxes of bullets, gun parts, cars and other things in Sanon's house in Haiti.

Charles said Sanon flew into Haiti in June on a private airplane with several of the suspected gunmen. The suspects were told their job was to protect Sanon, but they were later ordered to arrest the president.

Charles said one suspect called Sanon after the killing. Sanon then contacted two people the police believe to be leaders of the plot. Charles did not identify the leaders or say if police know who they are.

Sanon's friend said he attended a recent meeting in Florida with Sanon and other people, including Antonio Enmanuel Intriago Valera, the head of CTU Security. He said the meeting centered on rebuilding Haiti's water system and fixing roads.

He said Sanon asked why the security team accompanying him to Haiti were all Colombians. Sanon was told that Haitians could not be trusted and that the system is corrupt, the friend said.

He added Sanon called him from Haiti a few days before the assassination and said the Colombians had disappeared. "I'm all by myself. Who are these people? I don't know what they are doing," the friend quoted Sanon as saying.

Sanon's arrest comes as a growing number of politicians have opposed interim Prime Minister Claude Joseph. Joseph is running Haiti with support from the police and the military.

U.S. officials from the Department of Justice and the Department of Homeland Security met Sunday with Joseph, nominated Prime Minister Ariel Henry and Joseph Lambert, the head of Haiti's dismantled Senate. The delegation also met with Haiti's National Police and reviewed the security of critical systems.

White House press secretary Jen Psaki said, "What was clear from their trip is that there is a lack of clarity about the future of political leadership."

Dánica Coto, Terry Spencer and Ben Fox wrote this story for the Associated Press. Jill Robbins adapted it for Learning English. Hai Do was the editor.

assassinate – v. to kill (someone, such as a famous or important person) usually for political reasons

hell – n. a very difficult or unpleasant situation or experience

logo – n. a symbol that is used to identify a company and that appears on its products

quote – v, to repeat (something written or said by another person) exactly

interim – adj. used or accepted for a limited time; not permanent

dismantle – v. to destroy (something) in an orderly way : to gradually cause (something) to come to an end

clarity – n. the quality of being easily understood

What do you think of the mystery surrounding the assassination of Jovenel Moise? We want to hear from you. Write to us in the Comments Section.