< Myanmar’s Miss Universe Contestant: ‘Our People Are Dying’
Update Required To play the media you will need to either update your browser to a recent version or update your Flash plugin.
By Bryan Lynn
17 May 2021

The contestant, Thuzar Wint Lwin, spoke out in a video message created for the pageant, which took place Sunday in Hollywood, Florida. "Our people are dying and being shot by the military every day," she said in the video.

Myanmar's military overthrew the elected government of Aung San Suu Kyi on February 1. The government has used deadly force against individuals protesting the overthrow. Activist groups say nearly 800 people have been killed by security forces in demonstrations across the country. More than 5,000 people have been arrested in connection with protests. 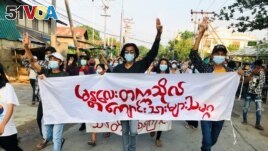 Students hold a banner and flash the three-finger salute as they take part in a protest against Myanmar's junta, in Mandalay, Myanmar May 10, 2021. REUTERS/Stringer

"I would like to urge everyone to speak about Myanmar," Thuzar Wint Lwin said. "As Miss Universe Myanmar since the coup, I have been speaking out as much as I can," she added.

The Miss Universe contestant is among numerous well-known individuals in Myanmar to voice opposition to the military takeover.

Thuzar Wint Lwin did not make it to the final round of the pageant. She did, however, win the award for Best National Costume. It was based on the ethnic clothing of her Chin people from northwestern Myanmar.

During the costume competition, she raised a sign over her head that read: "Pray for Myanmar."

In another message to Myanmar, Pope Francis urged people there to stay strong and not permit small conflicts to turn into big divisions. The pope spoke during a special religious service Sunday in Rome. Some members of Italy's Myanmar community, many of them students, attended the service.

"Your beloved country of Myanmar is experiencing violence, conflict and repression," the pope told attendees.

He urged people to draw strength from teachings in the Bible, Christianity's holy book, which describes the final hours of Jesus Christ. "He does not resign himself to evil, he does not let himself be overwhelmed by grief," the pope said.

Francis, who visited Myanmar in 2017, has repeatedly denounced the military overthrow. Most of Myanmar's population is Buddhist, but the country is also home to about 800,000 Roman Catholics.

Francis said people should aim to keep their faith and hope "even in the dark night of grief, even when evil seems to have the upper hand." He also urged the people of Myanmar not to give up their values and to try to remain unified.

Since seizing power, the military has struggled to govern. Protests, strikes and a civil disobedience campaign have hurt businesses and government services. An armed resistance has also gotten stronger in the country's northwest.

The military has said it seized power because of wrongdoing in elections held in November. The country's electoral commission has rejected the claims of wrongdoing.

contestant – n. one who participates in a competition

coup – n. sudden attempt by a small group of people, often military members, to seize and take over the government of a country

overwhelm – v. give too much of a thing to someone

grief – n. a cause of deep sadness

faith – n. the belief that something is good, right and able to be trusted

have the upper hand – phr. to get into a stronger position than someone else so that you are controlling a situation