< Myanmar’s Military Seizes Young Men to Crush Uprising
Update Required To play the media you will need to either update your browser to a recent version or update your Flash plugin.
By Dan Novak
07 May 2021


Myanmar's security forces are arresting thousands of people. Most are boys and young men. But many families of those taken do not know where they are.

UNICEF, the United Nations children's agency, says it has reports of 1,000 cases of children or young people being arrested and jailed. Many do not have lawyers and cannot see their families. UNICEF says the majority of those taken are boys.

The military has used arrests and imprisonment to make people afraid and to stop the pro-democracy movement in the country. Some are taken overnight and some in the middle of the day. People are taken from their homes or from the street. Some have been found dead. Many are imprisoned and sometimes tortured. Many more are missing.

Mee is a 27-year-old villager living in the northern area of Mandalay. She watched as children on motorbikes rode by her house toward the woods. Not long after, the village elders had a warning: All the boys must leave and get somewhere safe. The soldiers might be coming.

The military's tactics are effective. In villages and cities, people watch for soldiers. They yell or bang on pots and pans to warn their neighbors if they are coming.

"I am more afraid of being arrested than getting shot," said one 29-year-old man. "I have a chance of dying on the spot with just one shot. But being arrested, I am afraid that they would torture me." 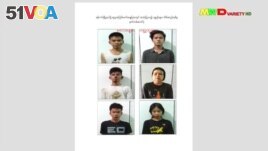 This image from an April 18, 2021 news report by Myawaddy TV shows people who security forces said they detained in a weapons raid a day earlier in Yangon, Myanmar. (Myawaddy TV via AP)

Since the military took control in February the conflict in Myanmar has become much more violent. Security forces have killed more than 700 people, including a 9-year-old boy.

The Assistance Association for Political Prisoners (AAPP) investigates deaths and arrests in Myanmar, formerly known as Burma. The group found that at least 3,500 people have been detained since military rule began. More than three-fourths of the people are men. Of the 419 men whose ages are known, almost two-thirds are under age 30, and 78 are teenagers.

Pictures of people taken by the police have been seen online. In the pictures, there are signs of beatings and torture. The military's methods in showing the photos suggest it is trying to intimidate people.

After receiving questions from The Associated Press, the military, known as the Tatmadaw, held a press conference on the video service Zoom. It called the AAPP a "baseless organization." It denied the information was true and said security forces are not targeting young men.

"The security forces are not arresting based on genders and ages," said a military spokeswoman. "They are only detaining anyone who is rioting, protesting, causing unrest."

Some of those taken by security forces were protesting. Some have connections to the political party that the military overthrew. Many are taken for no known reason. They are charged with making comments that "cause fear" or spread "false news."

Experts say both the military and police are responsible for the disappearances. Matthew Smith is the head of the human rights group Fortify Rights. He said there appeared to be "some national level communication and coordination taking place."

Families are worried and trying to find information about their loved ones. Some have been sending food to the prisons. They hope if the food is not sent back, their relatives are still alive.

Wai Hnin Pwint Thon is a Myanmar human rights activist. Her father was arrested during a 1988 protest against military rule. The family waited months before they learned he was in prison.

"I can't imagine families of young people who are 19, 20, 21, in prison," she said. "I'm trying to hold onto hope, but the situation is getting worse every day."

Victoria Milko and Kristen Gelineau reported this story for the Associated Press. Dan Novak adapted it for VOA Learning English. Mario Ritter, Jr. was the editor.

elder –n. a person who has respect because of age and experience

tactic –n. an action or method that is planned and used to reach a goal

intimidate –v. to make (someone) afraid

baseless –adj. not based on facts; without a good reason

gender –n. the state of being male or female

coordinate –v. to make arrangements so that two or more people or groups of people can work together